As expected Saturday 25th July saw the return to service of both the Manx Electric Railway and Volk’s Electric Railway whilst down in Devon there was a increase in services to a 20 minute frequency.

A special timetable is running on the Manx Electric Railway with eight return services between Derby Castle and Ramsey and an additional out and back Derby Castle-Laxey working in the late afternoon. First tram from Douglas is at 0940, first back from Ramsey at 1110 with the final round-trip from Derby Castle to Ramsey departing at 1510 returning at 1640. The Laxey trip leaves Derby Castle at 1610, returning south at 1655.

This timetable require four tram sets to run and on the first day this saw 7+59, 20+46, 19+47 and 9+41 in operation. With track replacement works still taking place there were two sections of single-line operation: Groudle-Ballamenaugh and The Garey-Ballaskeig. The MER will now be running every Saturday, Sunday, Monday and Tuesday until Sunday 13th September.

In Brighton the Volk’s Electric Railway also ran for the first time since the Covid-19 restrictions but unfortunately poor weather during the afternoon saw the service suspended on Saturday 25th July. Better weather was seen the following day with two pairs in service: 6+10 and 7+8. The Volk’s will be running every Wednesday to Sunday with trains every 15 minutes.

Down at the Seaton Tramway – the first heritage line to resume operations – Saturday 25th July saw the upping of services to every 20 minutes (instead of every 30). This now means that five trams are required for service each day (with each driver having a designated tram instead of swapping between them as before). Trams 2, 6 and 12 have now been commissioned for service joining the previously commissioned 8, 9, 10, 11, 14, 15 and 16 which should ensure full coverage for all weather. The only operational trams not commissioned are 4 and 19 both of which suffer from low capacity. 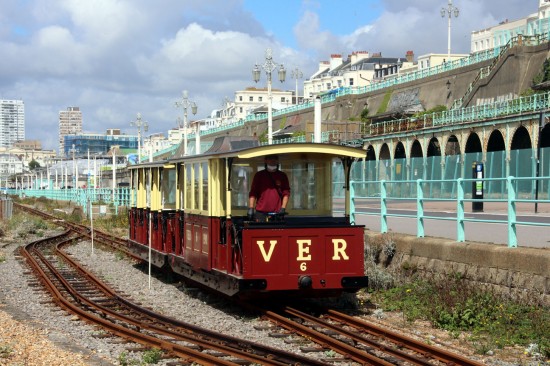 6+10 run through the passing loop between Aquarium and Halfway with a service for Black Rock. 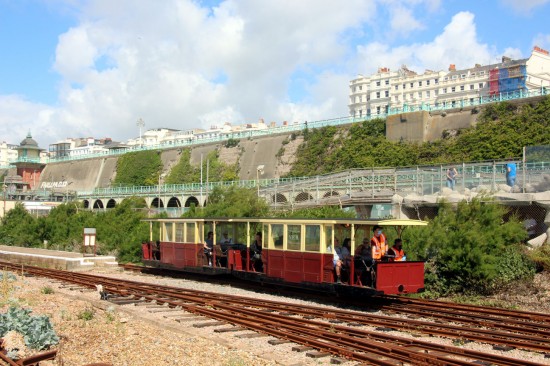 7+8 leave Peter Pan's Playground/Halfway with a service from Aquarium to Black Rock. (Both Photographs by Tony Sullivan, 26th July 2020)