It is probably tramway preservations biggest failure – the aborted preservation scheme at Leeds’ Middleton Railway. Over the next three weeks we take a look at some of the trams which were stored on site but ended up being scrapped after vandalism.

By the time this photo was taken during the early 1960s the trams on site at the Middleton Railway had already suffered from pretty bad vandalism as can be seen from many smashed windows and the peeling of paintwork. The tram in far distance is Feltham car 517 which was withdrawn from service in Leeds on 30th April 1959. Originally numbered 554 in the Leeds fleet the original 517 swapped numbers in February 1957 and it was as 517 that it was moved to the Middleton Railway on 26th March 1961 where it had been hoped a bright future in preservation would follow. Unfortunately, the tram was heavily vandalised during its time at Middleton and after a fire it finally scrapped in 1968.

This photo also shows Horsfield car 160 in the foreground, but we’ll be taking a closer look at that tram next week! 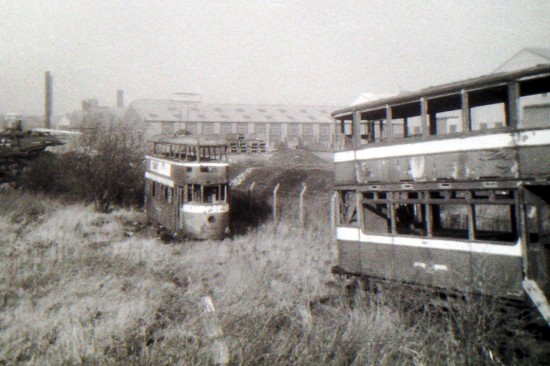