Posted on Thursday 13 June 2019 by Gareth Prior

We return to Crich for the next few weeks of the Traditional Tram Picture in Time series, starting in 1985 including a couple of loan trams.

This photograph was taken in August 1985 and our attention is immediately turned towards the two Blackpool trams in the centre of the image, both of which were visiting from Blackpool in exchange for other trams which had headed north for that tramway’s centenary celebrations. Those trams are Boat 607 (which had arrived in the April) and Balloon 710 (which had been in Derbyshire since the previous April); both would return to Blackpool in December 1985. It wouldn’t be the last time that 607 would be seen running through the quarry either as it would eventually be preserved and joined the national collection after the break-up of the traditional tram fleet in Blackpool.

Joining the two visitors in this photo are Blackpool Standard 49 – then part of the operational tram fleet at Crich – and then on the far right is the Blackpool Electric Locomotive, at that time in a red livery rather than the more recognisable green it wears today. Also seen in the depot are Leeds 180 and Paisley 68 with New York 3rd Avenue 674 just visible on the extreme left. 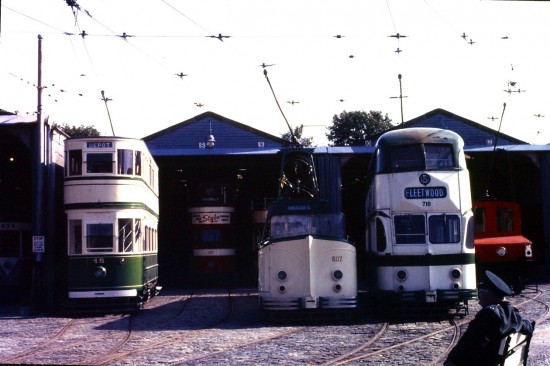