Posted on Saturday 22 September 2018 by Gareth Prior

Today we are off to Devon for our latest delve into the archives – the photo features the only tram still at Seaton withdrawn from service, no. 7.

7 is a tram which has featured quite a few times in this series so we will just look at the basics of its history this time around. Built in 1958 7 was one of the trams originally constructed to the 2 foot gauge of the Eastbourne operation but wasn’t regauged to 2 foot 9 inches until 1976 – six years after the operation had move along the coast. It remained in service for the next 31 years before withdrawal in 2007. It has remained stored at the back of the depot ever since and although some work on an overhaul was undertaken in the early years of its withdrawal it has remained out of service for over 10 years now.

We see the tram here approaching Seaton through the old car park in 2003. 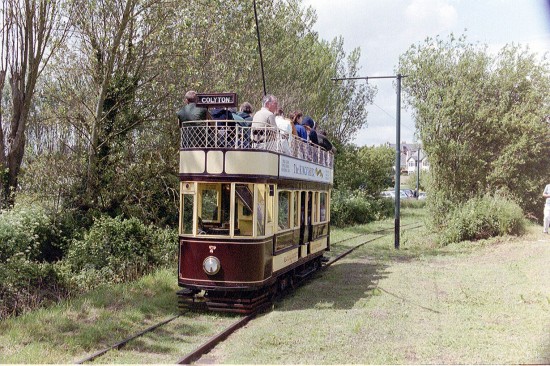