Posted on Tuesday 29 November 2016 by Gareth Prior

Today Picture in Time is in Devon for an image from the Seaton Tramway featuring one of the trams which has been given a new lease of life following a rebuild from its original identity as Bournemouth Corporation Tramways 106. It is of course Seaton 16.

106 was built by Brush in 1921 and was one of 20 open top double deckers built at this time for Bournemouth Corporation Tramways. Remaining in service on the Hampshire (as it still was then) town’s network until the 1930s – the tramway system closed in 1936 with trolleybus conversion having started in 1933, a network which remained open until 1969 – it was sold on for further use before it was rescued by the Bournemouth Preservation Group in 1974. It was presented to the Seaton Tramway and a decision was made that 106 would become the second rescued tram to be converted for use on the 2’9” gauge tramway between Seaton and Colyton. A fully enclosed single deck tram emerged in 1992 with the final product finished in the attractive Bournemouth Corporation colours of maroon and cream as seen on Bournemouth 85, soon to become part of the national collection.

This view shows 16 not long after its launch in service as the photo was taken in October 1992 and shows the tram at the Seaton terminus – a much changed location today with the holiday camp replaced by a Tesco superstore and housing and a new Victorian style terminus in situ (at least for now with plans existing to replace this with a more modern look). Tram Shop 01 is seen behind. 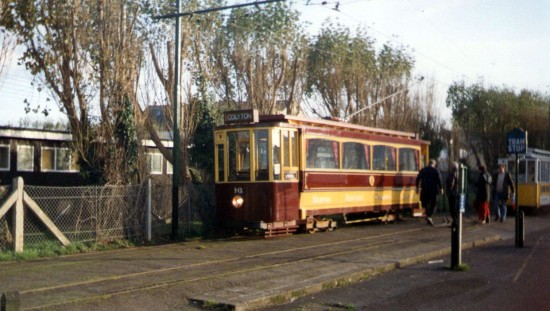