Whilst the expansion of the tram fleet at Beamish Museum has been a generally positive development, it has placed great pressure on the available depot space. The recent addition of Oporto C65 to the ranks following its transfer from the national collection has meant that insufficient space is available to house all of the museum’s trams and buses undercover, leaving Blackpool Brush Railcoach 621 outside again.

It will be recalled that Oporto coal tram C65 moved to Beamish in September this year following its donation by the Tramway Museum Society. Initially this tram was stored outside but recently it has been moved undercover, with 621 being stored on the depot track fan instead. In some respects this is an understandable move – whereas C65 had been kept dry and warm inside the TMS’ Clay Cross store since being shipped to the UK in 2005, 621 had already suffered at the mercy of the great outdoors whilst in the care of the Fleetwood Heritage Leisure Trust prior to its move to Beamish. Indeed, the tram’s external condition leaves a lot to be desired with shabby paintwork, missing windows which had been covered over and other evidence of body damage. Even before it had left Rigby Road the Brush car was obviously in a bad way and so it is probably sensible to store it outside rather than a tram which appears to be in a superior condition. However, standing a popular Blackpool car outdoors in the winter is unlikely to go down well with many tram enthusiasts and if it suffers any further deterioration this could well become an issue when its time comes for restoration. Such a shabby-looking tram painted in a modern advertising livery (the tram retains its ‘Hot Ice’ all-over advert applied in 2000) is also not exactly a great image for the museum, and yet it is now standing in a very prominent position.

Oporto 196 has recently been undergoing some workshop attention due to issues with its motors, and whilst out of action its partly dismantled truck was also stored in the open, with some tape around it to discourage visitors from tampering with it. Again, this highlights the severity of the storage situation at Beamish and also the pressures on the operational tram fleet, as 196‘s temporary absence left just four cars available for service for the busy Halloween events.

Beamish definitely deserve plaudits for giving sanctuary to both C65 and 621, but the latter’s current situation is highly regrettable and hopefully will only be a very short-term measure. The museum has plans to build a new bus garage which should free up valuable space in the current depots for trams, and hopefully this project will be treated as a high priority for the sake of its vehicle collection. As well as being priceless historic artifacts, the trams are also invaluable for transporting visitors around the large museum site and whilst the transport department there have clearly taken great strides to acknowledge this, it is hoped that more will be done in future to reflect their value to the visitor experience. 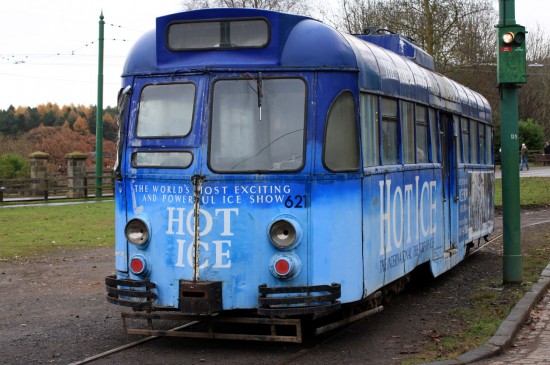 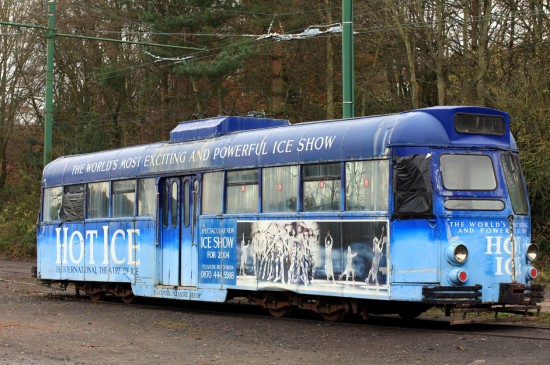 Two photos showing 621 outside the tram depot at Beamish on 27th November. (Both Photographs by Martin Hague)