As we approach the end of another year we start to turn our attention towards celebrating what has gone on over the past 12 months and we all know what that means don’t we? Yes it’s time for the British Trams Online Tram of the Year contest! As always the contest starts with the nominations process and we are now seeking your nominations in four categories: Tram (traditional) of the Year, Tram (modern) of the Year, Tramway of the Year and Event of the Year. Nominations will remain open until Saturday 3rd December.

You can nominate as many trams, tramways and events as you like and we will then make a decision on what should make the final shortlist with voting open for 4-6 weeks. To nominate you can either comment below, email gareth@britishtramsonline.co.uk or leave a comment on Facebook. If nominating please give reasons for your nomination as although many will be obvious you may have an idea which no-one has considered!

So what are the categories?

There is no doubt that this category has been dominated by Blackpool over the years (10 of the 14 trams which have won the category have at least operated in Blackpool!) but in 2015 this stranglehold was loosened with Liverpool 245 taking the honours. But which tram has done that something special in 2016?

A category which has only been on offer for two years and on both occasions Manchester Metrolink trams have got the most votes (1007 and 3100 respectively). As things stand at the moment we may not open voting for this category as there don’t seem to have many modern trams making the news in 2016 but we will open nominations and see whether we can get at least two trams on the shortlist!

This will be fourth year that we are looking for Tramway of the Year and in the past this has gone to Blackpool (twice), Crich and Heaton Park. We aren’t looking for the tramway which has operated the best service (there are other far more serious award ceremonies for that!) but rather, and here’s that word again, the tramway which has done something special in the year. It’s up to you what that something special is! And please note this is a joint category for both modern systems and museum lines.

Another category which was launched in 2012 and this has been shared between Crich and Blackpool in the four years so far with three of the occasions being due to an anniversary celebration. With 2016 seeing no major anniversaries that pattern will almost certainly end but which event do you think has been the most special (sorry there is that word again!)

And remember this category doesn’t have to be an actual special event on a heritage line (although it has been almost exclusively that in the past) it can also be a line opening on a modern tramway system. But once again it is up to you to put your nominations forward!

If you want to know more about the British Trams Online Tram of the Year contest please visit the dedicated Tram of the Year page which provides details of all winners since the very first contest in 2003. 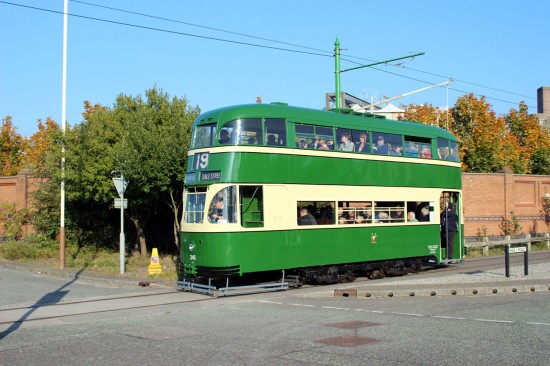 The 2015 winner of Tram (traditional) of the Year is seen at its home tramway in October 2015. But which tram will take the title in 2016? (Photograph by Gareth Prior)

18 Responses to British Trams Online Tram of the Year 2016