We are heading back into the black and white era for today’s Picture in Time image as our time machine lands in Glasgow during 1961 at a time when the extensive Glasgow Corporation Tramways was on the final straight of operation. The tram that got in the way of our photographers camera was Coronation 1158.

1158 was one of 150 Coronation Cars built in Glasgow Corporation’s famous Coplawill workshops between 1937 and 1941 at a time when they were both trying to update the fleet of trams (these trams offered a significant improvement in comfort) and increase capacity with the impending Empire Exhibition expected to see a large influx of visitors to the city. 1158 was the 16th of the class to be completed and would have entered service in 1937/8. Exact details of when it entered service and how long it remained as part of the operating fleet have not been able to be located (although I am sure if someone out there knows they will be happy to let us know in the comments section below). 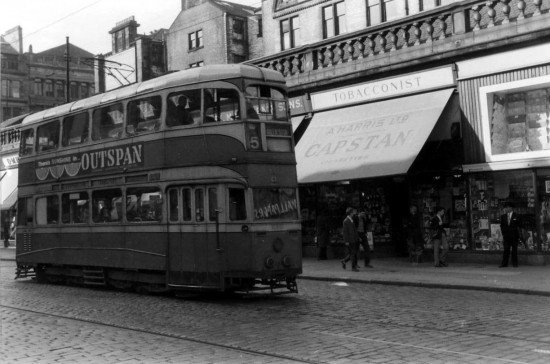 2 Responses to Picture in Time: Glasgow 1158