Cash boost for the Sheffield trams of Crich

The extensive collection of Sheffield tramcars owned by the Tramway Museum Society look set to benefit from the latest incredible act of generosity by a late tram enthusiast. TMS member Roger Benton who passed away recently, has bequeathed the remarkable sum of £345,000 to be used for the sole purpose of assisting with the restoration of Sheffield trams at Crich.

With no less than seven Sheffield cars of varying shapes and sizes in the national collection, there is great potential for this huge donation to be of real benefit to the museum. Of these trams, just three – horse car 15, short-canopied car 74 and ‘Roberts’ car 510 are currently operational although all three will obviously require investment in the future to ensure that they remain in pristine condition. Of the others, Sheffield Railgrinder 330 has been withdrawn relatively recently but the other three have not run for many years and offer some really exciting opportunities thanks to this legacy. Of the trio, perhaps the most appealing is Sheffield 46, the oldest surviving electric tram from the Yorkshire city, which has been hidden away at the Clay Cross store since December 2005. This tram requires a complete rebuild having suffered badly from salt corrosion during its years as a works car, although this had ensured its survival into preservation, and is currenly in an unauthentic condition as it was reduced in length when converted for this role by cutting out a section of its centre and then joining the two ends back together! Restoring 46 to operational condition would allow Crich to represent a British four-wheel single deck electric passenger car, something which is notably missing from the running fleet at present.

Other possibilites include the restoration of either of the two Sheffield ‘Standard’ cars at Crich, 189 and 264. Of the two, 189 would probably be a more likely candidate to receive a full restoration as 264 has previously been suggested as a car to be conserved, although debate continues as to the extent of work undertaken on it since it departed Sheffield. Although not as distinctive as the single decker, running one of them would enable the museum to showcase a typical Sheffield tram to visitors and it would also provide a nice contrast with the earlier and later developments with the city’s tram fleet, represented by 74 and 510 respectively. Hopefully the money will be put to good use and can benefit some of the trams mentioned above whilst also benefitting the National Tramway Museum as a whole, as a lasting legacy to the extreme generosity of Mr Benton. 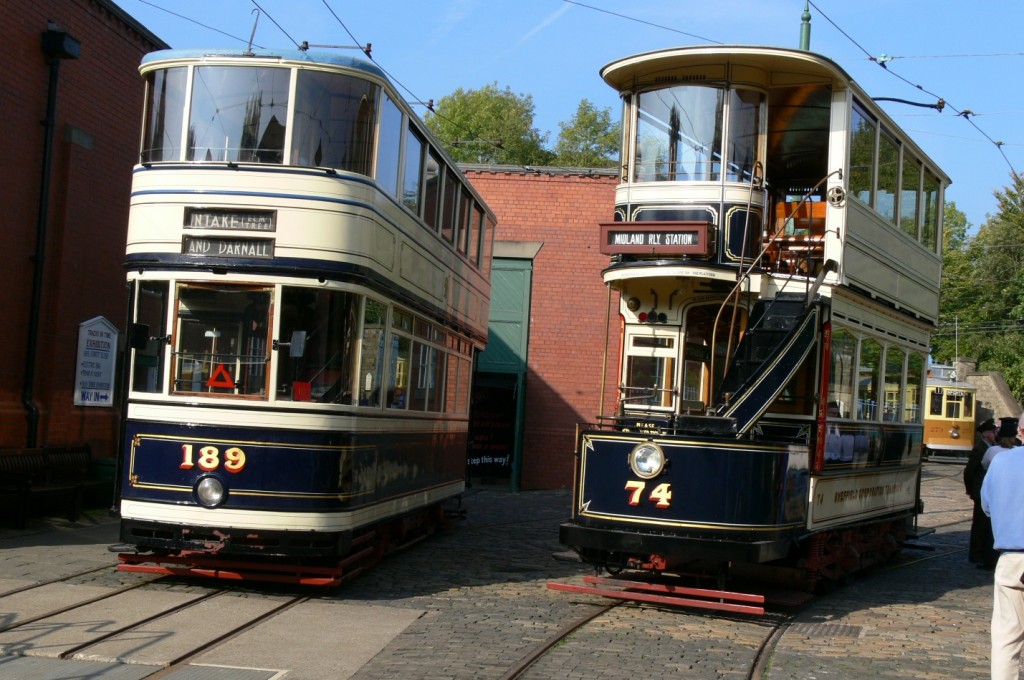 Two of the Sheffield trams which could benefit from this legacy are seen together in the depot yard at Crich. Standard 189 last ran in 1980 and requires major body work to run again, whilst the older 74 is still a popular member of the operating fleet having been restored to service in 1995. (Photo by Tony Waddington)

2 Responses to Cash boost for the Sheffield trams of Crich