Posted on Thursday 24 September 2015 by Gareth Prior

As we take our regular look at just when and where you can enjoy a ride on a traditional tram in the British Trams Online it would be fair to say that this weekend looks set to be a busy one! Of course there is the high profile Blackpool 130th anniversary events (26th and 27th September) but if Blackpool is not your thing don’t worry as you can also make the trip to the East Anglia Transport Museum for their End of Season Gala (26th and 27th September).  And if you don’t fancy going to a special event there are still trams running at 10 other locations in England, the Isle of Man, Scotland and Wales. Read on to find out where…

Open: Open every Thursday, Saturday & Sunday until the end of September and then Sundays only until end of October. Opening hours 1200 until 1630.

Current Status: Open every Sunday. Trams run between 1200 and 1700 on Sundays. 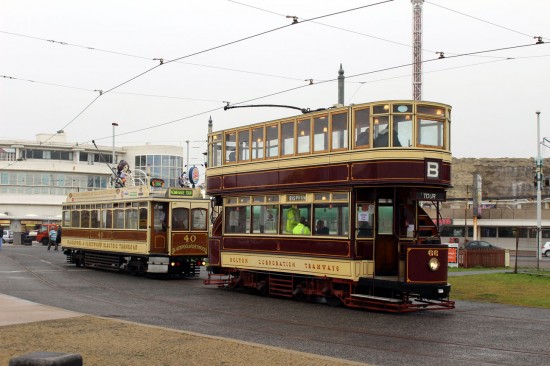 There are three things in this photo, two of which will hopefully play a major part in this weekends events in Blackpool and one which will hopefully stay away! Bolton 66 and Box 40 wait on Pleasure Beach loop on 20th June 2015 for their next journey. The weather on this day was wet, wet, wet and that is what we hope doesn't come for the 130th anniversary! (Photograph by Gareth Prior)