Posted on Friday 25 September 2015 by Gareth Prior

With this weekend’s Blackpool 130th anniversary events including a double depot open day today’s Picture in Time selection goes back five years to the last time there was an open at Rigby Road during the 125th anniversary. We take a look at a selection of images from that day including some of the displays on the depot fan, inside the depot building and in some of the varying workshops.

The 2010 Open Day took place on 26th September which was the Sunday of the events week and saw the doors flung open to the public. A number of trams were displayed on the depot fan whilst there was also the chance to take some photos of those trams which remained in the depot building – some of which had already been withdrawn by this stage. Possibly the highlight for many though was a tour behind the scenes including visits to the Paint Shop, Fitting Shop, Body Shop and Electrical Compound.

This first image shows three trams which it had been hoped would play a starring role in the events but fate transpired against all three. On the right we have Standard 143 – the restoration of which was not completed in time and remains in this same state today – and then two trams of the national collection: Pantograph 167 and Oporto 273. Both of these latter trams suffered with problems during their stay and didn’t end up taking any part in the main events, for 167 this has since been rectified with a visit in 2014 but 273’s chance to shine in Blackpool has now passed. 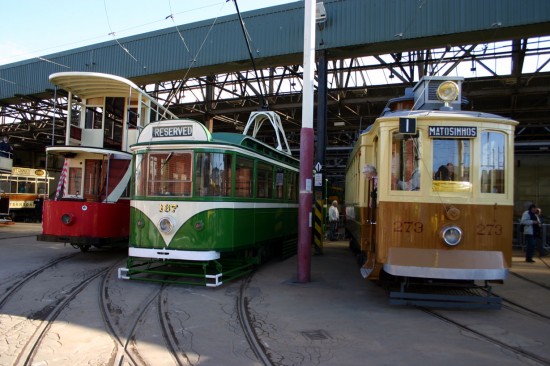 In the below image we feature three trams which are all still situated in Rigby Road Depot although only one of them has remained in situ throughout the intervening period away. The trams in question are Brush Cars 259 (which had left as part of the LTT collection but returned in December 2013) and 627 (now back to its pre-1968 identity of 290 and having spent the past three years as a static exhibit at Pleasure Beach) and Coronation 660. 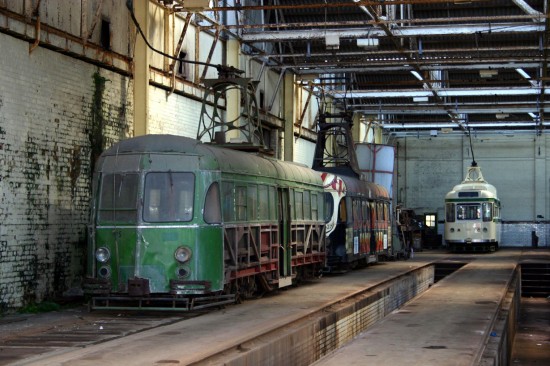 Another image inside the main tram shed with the majority of these trams either now in another location or wearing a different livery. We have Brush 625 (now at Wyre Dock), Balloon 710 (also at Wyre Dock), Balloon 708 (in Sunderland at the North East Land, Sea and Air Museum), Boat cars 602 (still in Blackpool but now in a Red and White livery and going by the number of 227), 605 (now to be found in San Francisco), Brush 621 (now at Beamish awaiting restoration) whilst on the far right can be seen Twin Car 676+686 – the only tram to be in the same place looking the same five years on! 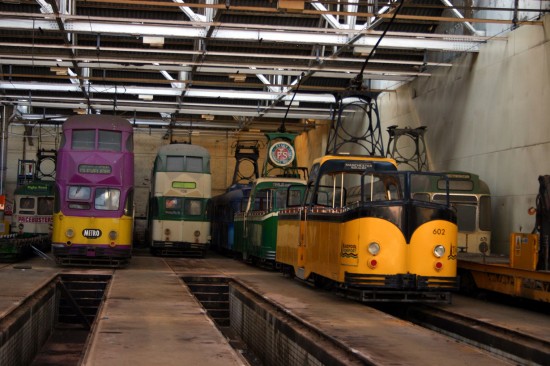 Inside the Paint Shop was Railcoach 680 which was in the process of losing its plain Blue base coat (left over from an all over advert) for a nice coat of cream paint. Of course 680 has left Blackpool gone to Beamish and Heaton Park and then returned to Blackpool in a new livery of 1990s Green and Cream since this photo was taken. 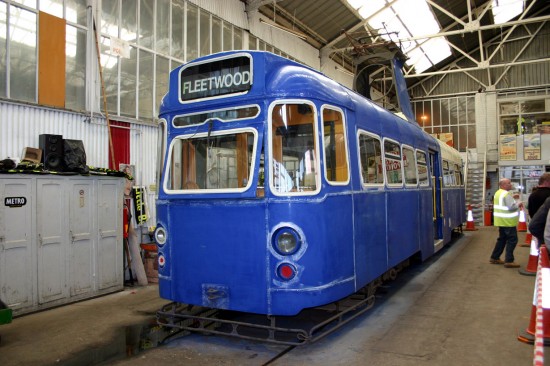 And finally inside the Electrical Compound was this little beauty – OMO 8. At this stage it was not known whether it would play any part in the events but here it is where it was receiving attention to allow it to star in the Cavalcade a few days later. 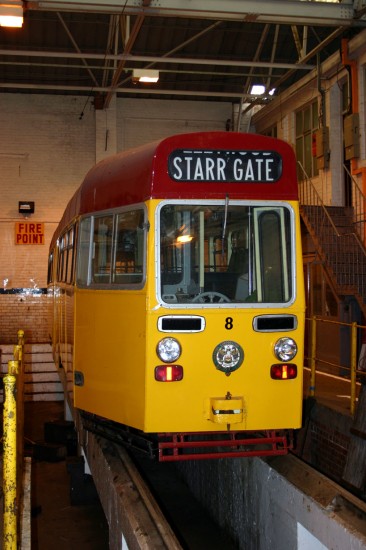