New hope for old friends to run again at Crich?

As most readers of this website will be aware, the queue of trams awaiting attention in the Crich workshops is a very long one, and some cars have been waiting for a considerable amount of time to receive the work they require to run again. For one tram however, that wait could be nearly over – after spending fifteen years out of action, Newcastle 102 has entered the works so that its condition can be fully assessed, with a view to possibly returning it to service.

The Tramcar Sponsorship Organisation have recently expressed interest in funding a major overhaul of Newcastle 102 and with this in mind, the car was moved into the workshop recently ahead of its appearance on the depot fan for the open top tram line-up during the ‘TMS 60’ event on 19th September. Shortly it will be lifted off its trucks to allow a more detailed assessment of its condition to be completed; 102 has already been the subject of a workshop condition survey but some parts of it could not be viewed properly without separating the body from the bogies. It is known that the tram has a broken axle and other damage to the platform at one end, but having only seen fairly limited use in preservation it is hoped that any other work required may not be too extensive. The outcome of this examination will presumably depend on the anticipated cost of the required work, but hopefully the findings will be positive and it won’t be too long before this large open top car takes its rightful place back in the operating fleet, as it would surely be a very useful and popular car.

Another tram which has been inactive for several years at Crich which was not expected to enjoy such an upturn in its fortunes, is of course the unique VAMBAC equipped Leeds 602. However, the Tramway Museum Society have recently revealed that the Museum Curator is reviewing the ‘Attitude Statement’ for this tram, detailing its historic significance and its key role within the national collection. This has been prompted by the presentation of new evidence regarding its previous restoration history, which has been acknowledged by management and the Tramcar Conservation Committee and will now be used to re-evaluate 602‘s position. Having previously declared that the car would be conserved in its current form rather than operated, despite the offer of a large sum of cash to enable a full restoration of the car, this apparent turnaround will no doubt be welcomed by many critics of the previous decision. Although a change of plan for 602 is by no means certain and the existing stance could well be maintained, it is pleasing that the TMS are willing to listen to its members when a strong case to challenge a previous decision is made, and it is hoped that whatever decision is ultimately made regarding the future of the tram, that it will be communicated just as openly to the membership. Incidentally, the executors of the will of the deceased Society member who had offered finance for the restoration of the car have indicated that, in the event that the original decision is reversed, the required funds will still be available.

Of course, as mentioned above, the Crich workshop is already somewhat overstretched with the pressures of maintaining a large running fleet whilst the ongoing restoration and conservation project involving London County Council 1 will occupy much time and energy for the next few years. We must also remember that varying amounts of finance are already set aside in restricted funds for cars including Blackpool Dreadnought 59, Blackpool Brush Railcoach 298 and Glasgow 1282, as well as the possible creation of a replica Manchester ‘Standard’ car. Bearing all of this in mind, there will be plenty of cars to choose from to occupy workshop capacity, meaning that recently withdrawn cars Southampton 45 and Glasgow 812 could have a long wait to receive the overhauls they now require. Arguably this may not be such a bad thing as most regular visitors would probably prefer to see some ‘new’ trams in service instead of the same cars which have run regularly for many years overhauled and continue to operate.

Which, if any, of the trams mentioned above will be next to benefit from the Crich workshop treatment remains to be seen but the next few years certainly look set to be an interesting time for the museum’s workshop programme! 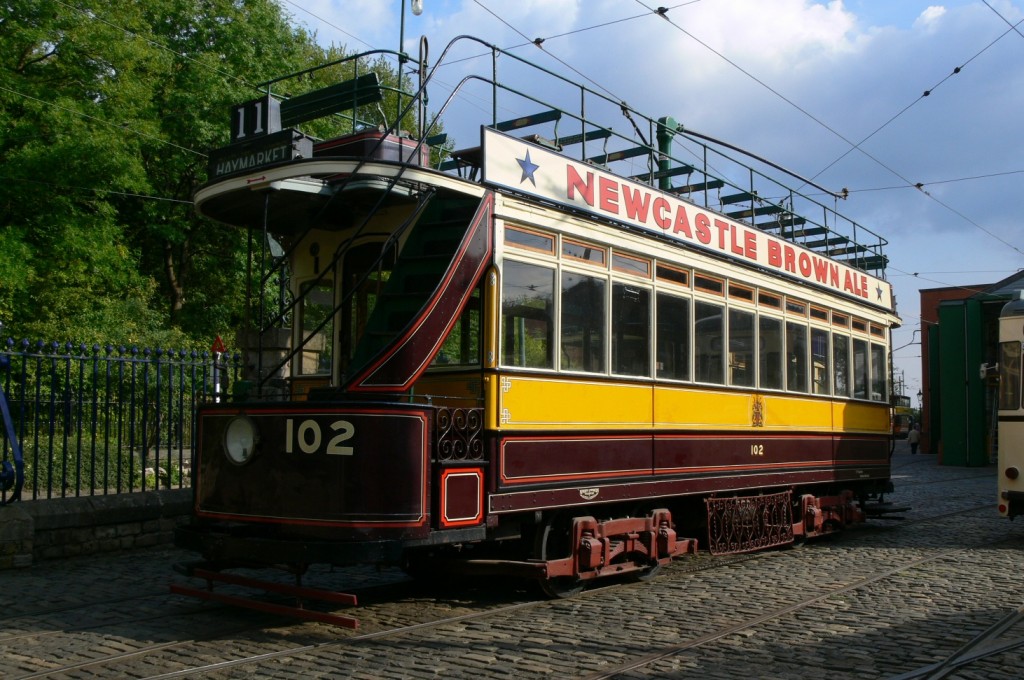 Could this be the next tram to be overhauled at Crich? Newcastle 102 enjoys a brief spell in the spotlight, and the sunshine, during the 'TMS 60' event prior to being lifted for examination ahead of a possible return to use depending on the associated costs. (Photo by Andrew Waddington)

8 Responses to New hope for old friends to run again at Crich?