The new Docklands Light Railway station at Pudding Mill Lane welcomed its first passengers on Monday 28th April following a ten day closure of the line into Stratford to connect it up to the rest of the network. The station is now the largest on the Docklands Light Railway and for the first time features double tracks rather than the single line which used to constrain this section of the line.

Rory O’Neill, Transport for London’s DLR Director, said: “The new station at Pudding Mill Lane will be a great asset to commuters, local residents and to visitors to this part of the capital. With the largest capacity on the DLR network the station will provide excellent access for people travelling to new entertainment venues in the area and to Queen Elizabeth Olympic Park.”

6,600 passengers can now be accommodated in each direction through Pudding Mill Lane instead of the previous 5,500, a major improvement for the original Stratford line which continues to see a major increase in passengers wanting to travel. Most services from Stratford run to Canary Wharf with a mixture of two and three car trains used.

The old Pudding Mill Lane station is now due to be demolished to make way for Crossrail. Once the station has been removed piling works will be able to commence to create a new retaining wall ready to accommodate the Crossrail tracks as they reach the surface. 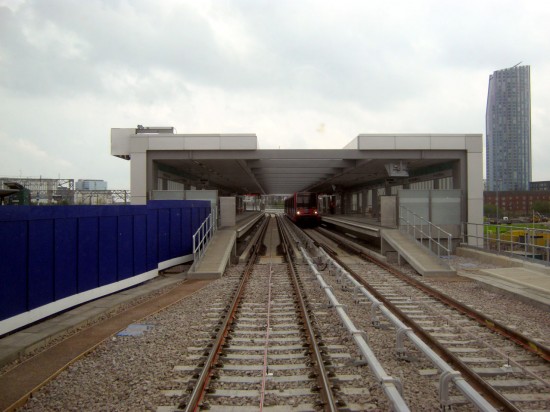 The new Pudding Mill Lane station is seen from on board one of the DLR units heading towards Stratford. 65 is in the station bound for Canary Wharf. (Photo: David Bosher, 28th April 2014)