It probably hasn’t escaped your notice but at the start of June there is an extra Bank Holiday as the country celebrates the Platinum Jubilee of Her Majesty Queen Elizabeth II. This rare (its almost impossible that anyone reading this will see another Platinum Jubilee in their lifetime) occasion will see a number of events taking place across the country and we also fully expect there to be a number of special liveries on trams and other public transport vehicles across the UK as everyone rushes to mark the occasion. The first tramway off the mark with their own special vinyls is the Blackpool Tramway – although it’s a little of an underwhelming effort.

The tram chosen for the special vinyls is Flexity2 010 which has received vinyls surrounding the windows on the centre section as well as above the windows on the two end sections. Using a regal purple colour the unfortunately side effect of the application of these vinyls is that it just goes to show how much the purple of the fleet livery has faded after 10 years of hard operation in the coastal environment of Blackpool.

Both the above window vinyl and the centre vinyl say “We are proud to celebrate Her Majesty the Queen’s Platinum Jubillee”. Its not known how long these vinyls will stay in place but if you consider how long most adverts have stayed on Blackpool’s modern trams they may still be there for her 80th jubilee!

Blackpool Transport have also applied special vinyls to a couple of buses and as part of the Bank Holiday celebrations there will be a Parade of trams from Pleasure Beach to Little Bispham on Thursday 2nd June. Featuring “around a dozen” trams they will pause at the Tower Festival Headland for a unique photo opportunity on their way north. Its now been confirmed that the Parade will set off at 1430. Following on from this there will be The Big Comedy Picnic from 1500 to 1900 including free live entertainment. 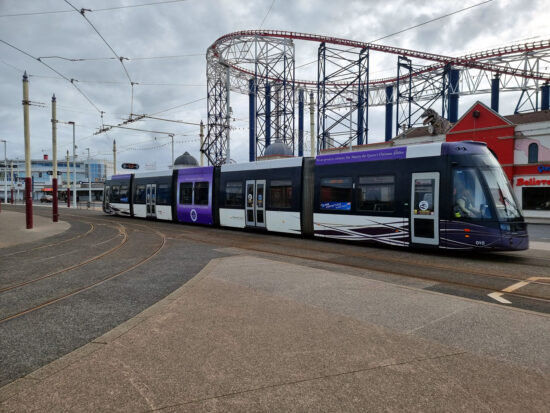 010 passes Pleasure Beach on its way down to Starr Gate showing the complete effect of the vinyls. 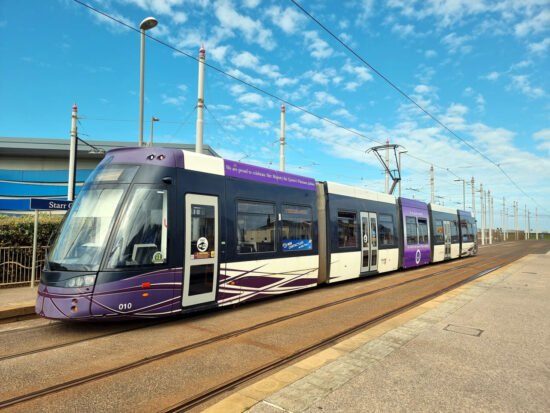 Another view of 010 as it waits out time at Starr Gate. 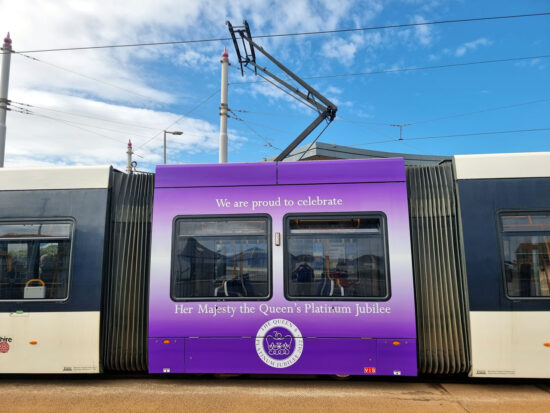 A close-up shot of the centre section. At least it doesn’t include any contravision. (All Photographs by Michael Morton, 10th May 2022)