With no public tram services still able to run on the West Midlands Metro as repairs to the trams continue at the depot the chance (sensibly) is being taken to undertake maintenance work on the tramway. This has recently included the replacement of rails at Black Lake as shown in this update.

Testing of the line through to Edgbaston Village seems to have been noticeably quiet in recent weeks after the great fanfare of the first runs (which then seemed to get reported about again two weeks later by some media outlets) although some trams have been noted out and about at times. These have mainly been the newer Urbos 100 trams although at least one Urbos3, 37, has also been out. 37 was the tram which went back to Spain for repairs in 2020/2021 and upon its return it seems now that it had already had some panel replacement work undertaken.

Whilst the fact that there are no trams running a service at the moment is not a positive in any way, the fact that the opportunity is being taken to undertake maintenance work on the infrastructure is (you can imagine the headlines if the line was to reopen and then a couple of weeks later there was to be a closure for trackworks!). The final week of April has seen work taking place in the Black Lake area. 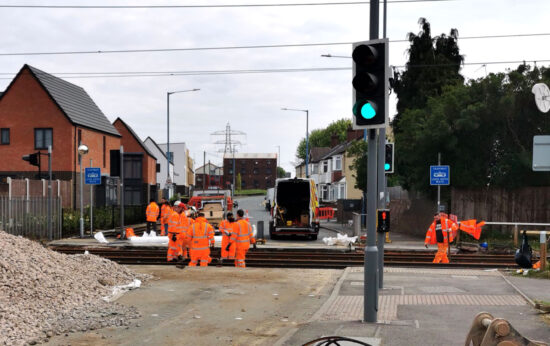 The road crossing to the Birmingham side of Black Lake is the location for this shot. The rails are being replaced and judging by that pile of stone there will be a lot of re-ballasting happening as well.

A road rail vehicle was being used in the work. This view is looking towards the crossing.

A small wagon was also being used to transport materials. 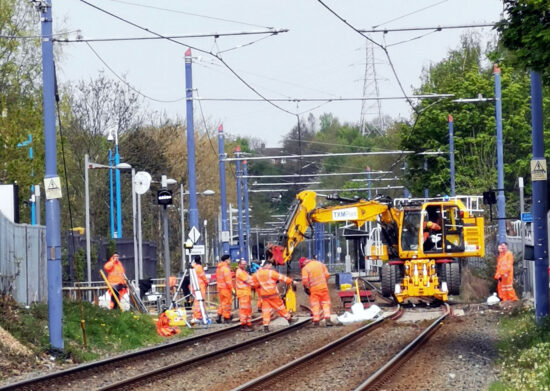 Another view of the works, this time looking towards Black Lake. (All Photographs by Andy Walters, 26th April 2022)