Around the World in Trams: Ballarat 12

Posted on Saturday 30 October 2021 by Gareth Prior

For the next few editions of “Around the World in Trams” we are going “down under” as we head to Australia for some images taken around the Ballarat Tramway Museum.

After the last 18 months where even localised travel has been a challenge its almost hard to remember that at the start of 2020 we took for granted free travel around the world including to places on the opposite side of the world in Australia and New Zealand. Over the next few editions of this series we will be taking a look around the Ballarat Tramway Museum with images taken at the start of February 2020 – little knowing how things would rapidly change over the next month.

The first view is in the workshops and shows Ballarat 12 under restoration. Originally built in 1892 it was initially a cable car trailer on the North Sydney line of the New South Wales Government Tramways it was purchased by the Electric Supply Company of Victoria Ltd in 1905 and rebuilt as a California combination car. Conversion to one man operation came in 1913 and it was then withdrawn in 1935 and sold on for an alternative use. It was rescued in 1990 and is now under restoration as seen in the below photo with the body now mostly complete. 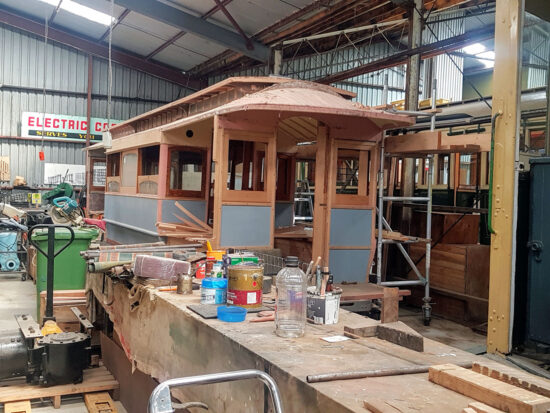