Posted on Friday 22 October 2021 by Gareth Prior

If you’re travelling by tram in Edinburgh there is no excuse for not knowing where the tram is going now as they have recently introduced the use of not only the electronic destination displays but also a destination board in the lower section of the cab window. Its understood that the reason for this new innovation is that those intending passengers who were standing close to the tram were not looking up at the destination display and so its been decided to add these manual boards as well to ensure everyone knows just where they are going! 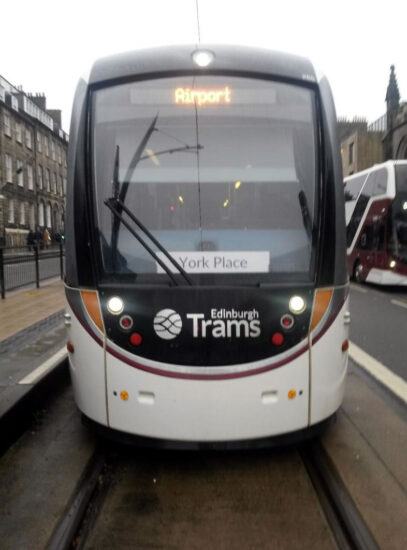 To demonstrate the new destination boards we feature 265 sitting at York Place. The cab board is much clearer but in this case the driver has yet to flip the board to show Airport as the destination. Similar boards were carried on the first generation trams usually to indicate intermediate points of interest on the route. These boards were known as tram-boards. The practice of attaching boards continued with the replacing buses and they continued to be referred to by the staff as tram-boards. (Photograph by John Hampton)