Posted on Wednesday 22 September 2021 by Gareth Prior

It was the return of the main enthusiast event of the year at the Crich Tramway Village on Saturday 18th September with a one day spectacular to showcase the operational fleet and for some rare photographic opportunities. During this year’s event the chance was taken to let the Workshop take centre stage with not only three photo line-ups in the depot yard showing the current, winter and future Workshop programmes but also a couple of trams which have recently been in the workshop were seen out on the mainline under test ahead of their returns to service.

It has been almost two years since there was such a large-scale enthusiast event at Crich with the pandemic meaning it was unable to be run satisfactorily in 2020 but with the lifting of restrictions it was decided to press ahead for 2021 and although slightly fewer trams than previous years were running it still proved to be a very busy event.

In total 14 different passenger trams ran in service during the event with up to 10 at any one time out on the mainline. The day started shortly after 1030 with the first three trams heading up the line. Led by Leeds 345 with Leeds 399 and Leeds 180 following on behind this Leeds cavalcade was intended to help 345 celebrate its centenary with it having originally entered service back in 1921.

Alongside the Leeds trio the morning saw Blackpool 630 make its passenger service debut for the year while Sheffield 74, London County Council 106, Blackpool 236, Oporto 273, Metropolitan Electric Tramways 331 and Liverpool 869 were also in service.

As is usual for these events come lunchtime and a number of trams returned to depot, or were stabled at Town End, for a break (or more specifically their crews took a break as trams don’t need to eat!). Blackpool 630, Leeds 345 and Leeds 399 were taken out of service and replaced for the afternoon by Chesterfield 7, Glasgow 22 and Blackpool 167. The fourteenth passenger tram in service was Access Tram Berlin 223 006-4 which ran a trip in the afternoon for pre-booked passengers.

Also out on the mainline at times during the event were Works Cars Croydon Tramlink 058, Cardiff 131 and the Blackpool Electric Locomotive, although this year it wasn’t possible for passengers to be carried. Completing the story of what made it out of the depot there were two trams out on test – one in the morning and one in the afternoon and helping to showcase the hard work the Workshop team continue to do to ensure we have a varied tram fleet available for service. In the morning Blackpool 166 – which had attention to its motors after a fault was discovered during commissioning – ran up and down the line as part of its return to service while the afternoon saw London Passenger Transport Board 1622 on test.

And talking of the Workshop this year the photo line-ups on the depot fan – for which events of this nature at Crich are famous for – had a very Workshop based theme with each of the three showing trams in the Workshop at the moment, trams which should return to service in 2022 after winter attention and the future restoration of Blackpool 298.

After the morning service trams had left the depot attention soon turned towards the first of these line-ups: “Current Workshop Programme”. As we have reported extensively over the past few years there are currently three major projects ongoing in the Workshop – London County Council 1, Newcastle 102, London Passenger Transport Board 1622. With only 1622 currently capable of moving under its own power the Blackpool Electric Locomotive was utilised to move the other two into position on the depot fan to give a tantalising glimpse of three trams we will all soon be able to enjoy at Crich. With 1622 expected to be first in service (and as we’ve already seen currently under test) followed by 102 and then eventually 1 they are sure to be three very popular and useful additions to the fleet – and they all look stunning!

The second of the line-ups was the “Winter Workshop Programme” with several trams which are due to head into the Workshops over the winter period with the aim of returning to action next year positioned at various points in the depot yard. This included Blackpool Standard 40, Blackpool & Fleetwood Box 40 and London United Tramways 159. Of these trams LUT 159 was even moved into the Workshop at the end of the line-up.

The afternoon then saw the last of the line-ups: “Future Workshop Programme”. This was probably the last chance to see the “before” of Blackpool Brush Railcoach 298 before it enters the Workshops for its full and extensive restoration back to original condition. The bodywork shell of 298 – with panelling having been stripped was towed out of the depot by the electric tug to allow it to be positioned on the depot fan for photos and to be inspected by anyone interested. The new underframe intended for the tram was also separately displayed – having been delivered from the Ffestiniog Railway back in July – on its accommodation trucks, which were once under Brush Car 638, alongside 298. To complete the line-up operational Blackpool Brush Car 630 was also on the depot fan to give a comparison to the final evolution of this class of tram. In fact with 638’s truck’s being under the underframe you could say that there were three different Brush Cars displayed for this photo line-up!

The event came to a close with one final passenger trip up the line from Town End to Glory Mine and back with Blackpool 236 a seemingly popular choice for this with it getting back to the terminus at around about 1720 still with an almost full load!

Another excellent enthusiast event at Crich that despite the effects of the pandemic was very well attended by enthusiasts and the general public alike – who would have thought a few months ago we would see so many full loads at Crich? 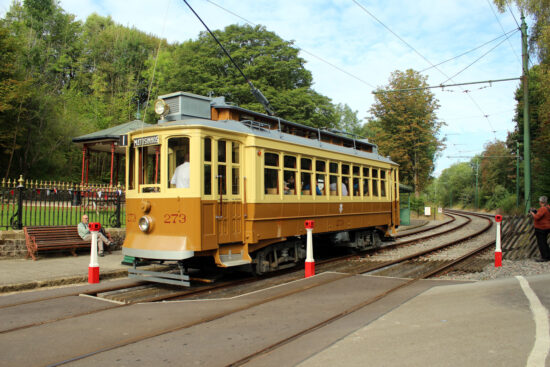 One of 14 passenger trams to run during the event was Oporto 273. This photo shows the Portuguese tram heading up the line and passing the Bandstand towards the start of the day. 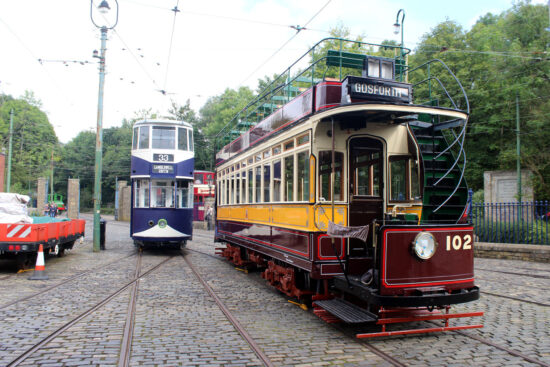 Part of the Current Workshop Programme line-up is seen in this view as Newcastle 102 and London County Council 1 pose for photos. 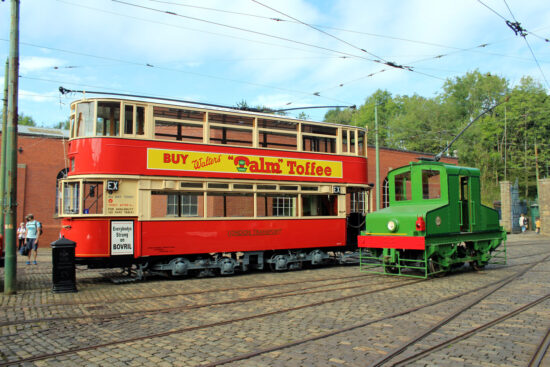 London Transport 1622 was also part of that line-up and we see it a little late on in the morning with the Blackpool Electric Locomotive alongside. The loco did a lot of the heavy lifting to get everything into place. 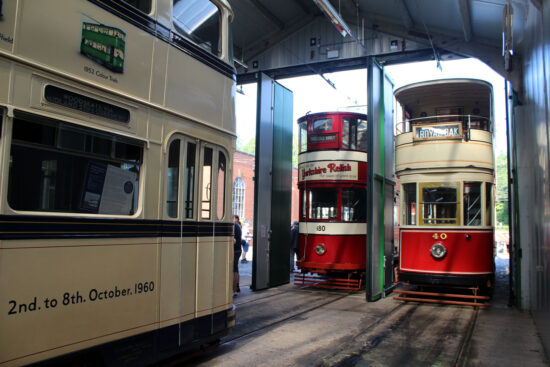 Taken from inside the depot this photo features Sheffield 510 and Leeds 180 and Blackpool 40 just on the depot fan during the “Winter Workshop Programme” line-up. 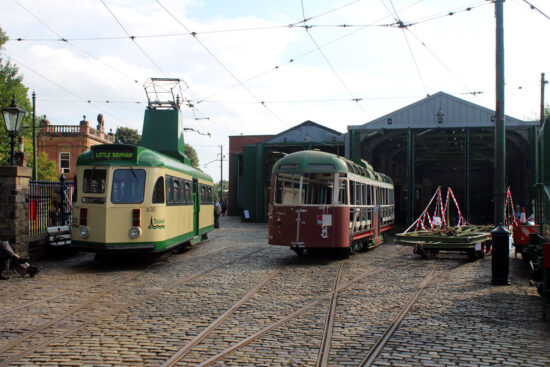 The afternoon “Future Workshop Programme” line-up with Blackpool 630, Blackpool 298 and Blackpool 298’s underframe all in view. 298 will enter the workshops in due course for a full start to be made on its restoration. (All Photographs by Gareth Prior, 18th September 2021)