With restrictions being eased again from today, as a bonus this week we will be bringing you more from our “Lockdown Walks” series and we start off in Sheffield.

We’ve mentioned adverts on trams in Sheffield several times during this series and so it is again today as the tram we feature below is one which although never having a full advert has seen its centre car used for campaigns. The first of these was between March 2004 and March 2005 which saw the centre car used to celebrate 10 years of Supertram and this was followed during 2005 by different ads on each side – one for “Let Congestion Pass You By” and the other for Energy Efficiency. But since these were removed the tram has remained in standard fleet livery. 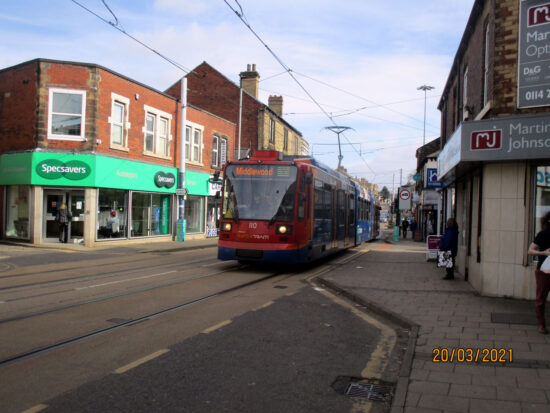 In this image we see 110 having just passed the junction to Malin Bridge as it continues along Middlewood Road for Middlewood. (Photograph by Stuart Cooke, 20th March 2021)