Its time for another “Lockdown Walk” as we venture out onto Manchester Metrolink’s East Manchester line out to Ashton-under-Lyne.

The below photo was taken on the second section of the East Manchester line to open to passengers with the first public services running between Droylsden and Ashton-under-Lyne on 9th October 2013. Initially served by a tram every 12 minutes the frequency had been increased to every 6 minutes for most of the day (except Sundays) before the pandemic struck with trams now running every 10 minutes in the revised timetable operating across the network as a result of the lower passenger numbers being carried. 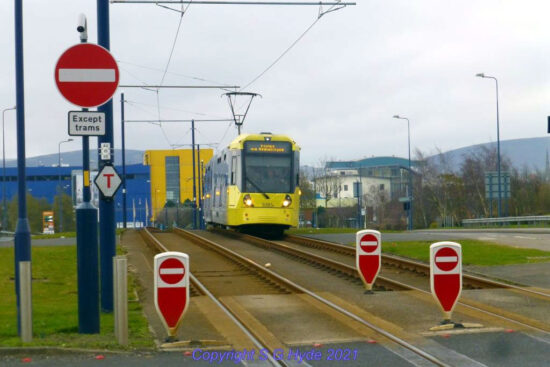 Here we see 3085 at Ashton West at the junction between Lord Sheldon Way and Richmond Street as it approaches the tramstop heading for Eccles. The red ‘T’ sign denotes the end of a temporary speed restriction at this location following a serious RTC late last year when a van demolished an overhead line pole resulting in a rather long wire span. (Photograph by Steve Hyde, 4th March 2021)