Posted on Monday 1 March 2021 by Gareth Prior

We return to 1976 for the next few editions of our Blackpool based “Picture in Time” series and we start off by taking a look at a tram which is always a popular one with enthusiasts – Dreadnought 59.

This photo was taken in early September 1976 inside Rigby Road Depot and shows the Dreadnought at rest and surrounded by various green and cream single deckers. This was the first year that 59 had run in Blackpool since its return to the resort from Crich in 1975 and if you look at the board on the front platform of the car it seemed it was running special trips along the Prom between Tower and Pleasure Beach. Who said that Heritage Tram Tours had only started in 2012 with the introduction of the Flexity trams to operate the core service! With fares at just 35p for adults and 10p for children it seems a bargain for a ride on a tram which was 74 years old at the time.

59 was one of the three batch of Dreadnought trams to operate in Blackpool entering service in 1902 and being withdrawn from service in 1934 with the advent of the streamlined trams including the Luxury Dreadnoughts. Whereas all other members of the class were to scrapped by the end of 1935, 59 would remain on Blackpool Corporation Transport property and it was duly resurrected for the 75th anniversary of the tramway and then preserved at Crich from 1965. After limited operation it would return to Blackpool in 1975 and after display on the Prom it was restored at the Blackpool & Fylde College, returning to service in 1976. It stayed operational until 1990 after which it went back on display at Crich for five years before being moved to the Clay Cross store in March 1995. 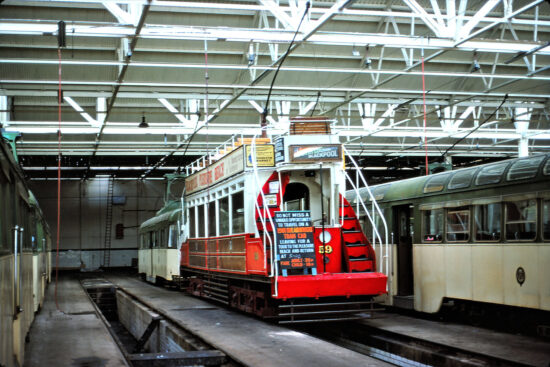