Posted on Monday 11 January 2021 by Gareth Prior

We’re off down to Rigby Road Depot for our latest archive image from Blackpool.

Again, the below image was taken in early September 1976 and shows what has always been a familiar scene at Rigby Road Depot – trams sitting on the depot fan waiting to head into service. Looking through the old tram wash we can clearly see three trams with a fourth (a Twin Car mostly obscured by one of the Balloon Cars on the far side).

In the centre of the image is that popular Balloon Car, 715. With the green and cream fleet livery of the era painted on the tram (complete with Corporation crests) the tram is presumably just stabled here waiting to either be returned to depot or for a later time when it will enter service as the blind is set to Manchester Square. Of note is that the tram has an advert for Binns, a company so familiar with Sunderland’s trams of course. Also in the image is Balloon 726 on the far side while behind 715 is Boat 602. Three trams and all green and cream! 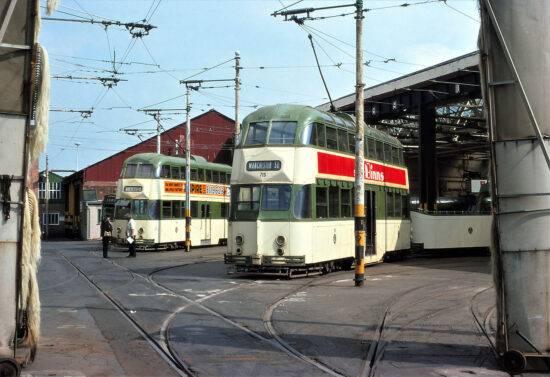