Posted on Tuesday 10 November 2020 by Gareth Prior

Before our modern tram Picture in Time series takes a break we are again making a stop on the Docklands Light Railway for an archive image dating from 2003.

In the below photo we see B92 47 just arriving at Limehouse on 12th March 2003 – the railway out of London Fenchurch Street can be seen to the right of this image. On this day 47 was partnered with 78 but this image doesn’t show the other part of this working. What can clearly be ascertained here though is that 47 is in an advertising livery for Lewisham Shopping Centre. This was probably the peak period of advertising liveries for the DLR with several companies having special liveries adorning the trains, something today that is a very rare occurrence. The two units are working a short-service to Crossharbour on the way to Lewisham. 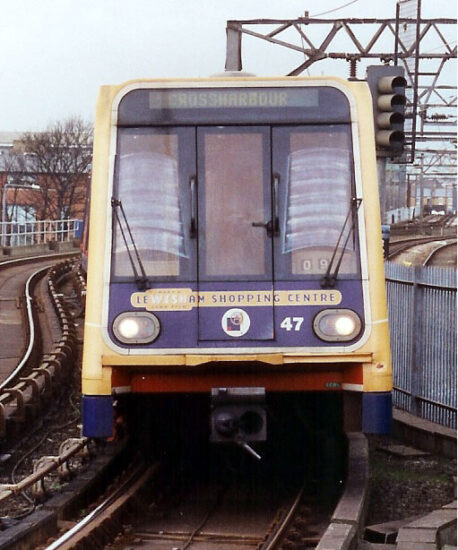