Posted on Wednesday 4 November 2020 by Gareth Prior

Another city in the British Isles to still have numerous examples of tramway rosettes is Chester and that is where we head for this latest edition of “Still Standing!”.

If you look around Chester City Centre the chances are that you will find a number of rosettes still located on the walls of buildings. As we’ve seen in this series before, you need to know what you’re looking for but if you do they are there to be seen. Having at one time been used to support the overhead wires for the tram, it was obviously considered easier to keep them on the buildings when the overhead was removed at the end of the tramway operation in 1930. There has been movement of some sort for the rosettes though as one has been deliberately lowered so that he can be more easily viewed by visitors to the city. 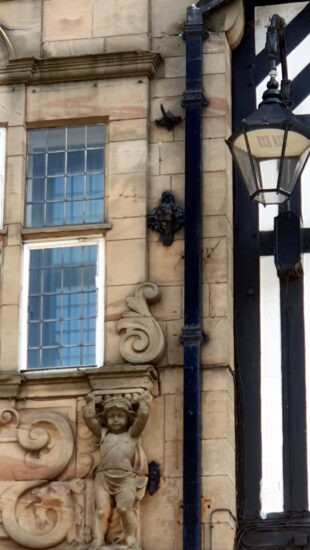 This is just one example of a rosette in Chester with both the main rosette and the secondary support attachments seen. (Photograph by Dave Jones)