This latest edition of “Lockdown Walks” is returning to South Yorkshire as we feature one of the trams in an advertising livery on Supertram.

One of the more unusual features of all over adverts on trams in the UK is that there haven’t been many companies who have advertised on more than one tramway at the same time, despite the fact that many are national brands and you would think they would have a consistent campaign across the UK. There have, of course, been exceptions and one of these has been Pretty Little Thing.com who have had adverts on not one, not two but three tramways in England. With the others being Blackpool (two trams) and Manchester (just one tram), Sheffield actually led the way with 111 and 118 receiving the adverts in April 2018 – and have kept them ever since! 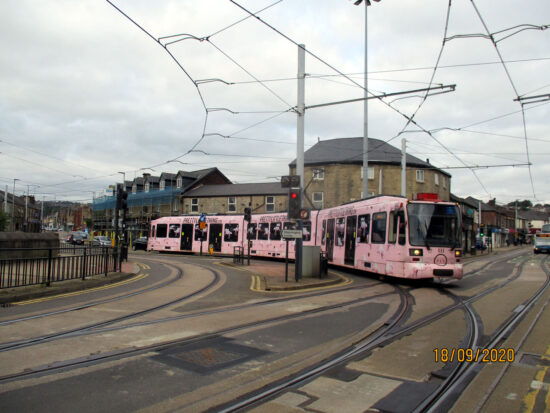 This photo shows 111 just turning the curve from Holme Lane on the approach to Hillsborough as it works a Blue route service which on this day would be running to Donetsk Way because of track replacement works at Crystal Peaks. (Photograph by Stuart Cooke, 18th September 2020)