In Pictures: Wires comes down on West Midlands Metro

Posted on Wednesday 23 September 2020 by Gareth Prior

Its been a while but Wednesday 23rd September saw another “wires down” incident on the West Midlands Metro causing major disruption for the service from just before 1000. The wires came down between Jewellery Quarter and St Paul’s leading to no trams being able to run from Winson Green Outer Circle to Library.

The incident occurred close to Hockley Tunnel no. 1 with Urbos3 trams 19 and 32 in the vicinity at the time. It is not clear what caused the problem with the wires but 32 (running inbound) hit a loose wire on its way south which broke the windscreen, a side passenger window and a door window. The pantograph was also damaged and the rear front top fairing came off in the impact.

Around a 30 foot long length of overhead was brought down in the incident with this seen on the ground close to the tramstop.

While 32 suffered the damage described above it is thought that 19 was the tram was initially brought the wires down after a gas tensioner failed although this is unconfirmed as is just conjecture for now.

Both 19 and 32 suffered damage to their pantographs along with broken windows and will require attention at the depot before returning to service.

Following the incident trams ran from Wolverhampton St George’s and Winson Green Outer Circle with no service further into Birmingham. Tickets were accepted on the National Express 74 bus and West Midlands Trains services.

A view from above of 32 showing where the fairing has been ripped off from the roof.

32 – with pantograph down – sits stranded at St Paul’s. 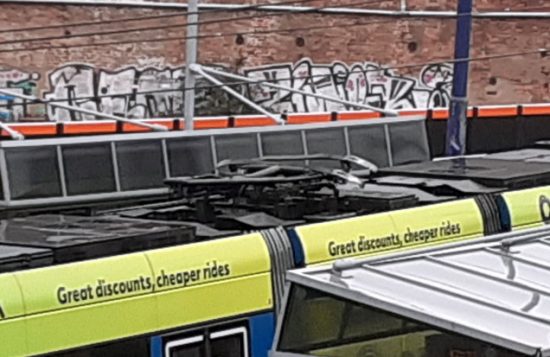 A close-up showing the damaged pantograph of 32.

Not immediately obvious in this image the windscreen here has been broken.

The side door was also broken.

A section of the downed wire moved to alongside the stop.

19 partially in Hockley Tunnel no. 1 awaits moving back to depot. (All Photographs by Andy Walters, 23rd September 2020)