Posted on Monday 14 September 2020 by Gareth Prior

For the next few weeks of archive Blackpool tram images we are a bit more up-to-date as we take a look at the Metro Coastlines years.

The tram in this image is Balloon 710 which became the first Balloon Car to receive one of the Metro Coastlines liveries over the winter of 2003/4. This is the line 7 Magenta and Yellow style which certainly made a big difference to the standard fleet livery colours of green and cream, although obviously we were well used to seeing advertising liveries at this stage. Metro Coastlines was the brand name used in the early part of the twenty-first century by Blackpool Transport with each bus route gaining a different colour. Whilst the tramway didn’t ever receive its own line colour the decision was taken to repaint a few of the trams in various different “line” liveries including this one.

We see the tram just having headed under the now long-gone Tower overbridge with one of the flat-fronted Balloon rebuilds in the distance. 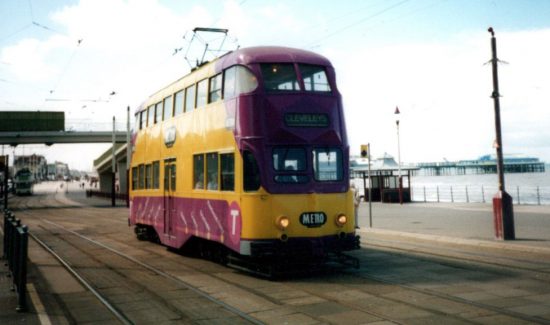