Following its enforced downtime work is now continuing at a good pace in the early stages of the Trams to Newhaven project in Edinburgh with various road closures in place to allow the work to take place. With site investigations now taking place, on section of the line the contractors have discovered some old tram track from the last time trams ran along Leith Walk.

The discovery of the old track was made on the section of Leith Walk between Annandale Street and McDonald Road. The track is being removed as part of the excavation works to prepare the surface for the installation of all new tram tracks ahead of the planned opening of the extension between York Place and Newhaven.

Recent progress has also seen the construction site from London Road to Crown Place fully established. This area is at the stage of site investigation and excavation works whilst the junction of McDonald Road with Leith Walk is seeing utility works take place.

Meanwhile, it has been confirmed that the position of the tram stop at Newhaven has moved further east of the previously approved position. It will also include a stabling area for trams (to allow for an earlier start time from trams than if all trams were kept at the depot at the other end of the line). The plans are now with the City of Edinburgh Council for final planning approval. 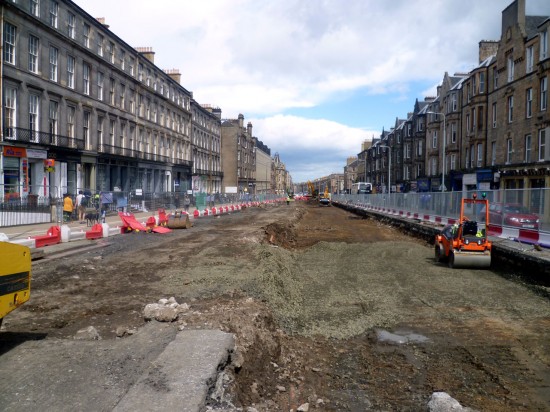 This view is on Leith Walk looking north towards Leith and Newhaven with Haddington Place to the left and Elm Row on the right. The stop at McDonald Road (the first after Picardy Place) will be in front of the more modern building on the left in the middle distance. One lane of traffic remains – a Lothian Buses service is seen squeezing through on the right using this. (Photograph by Roy Calderwood, 28th July 2020)