Posted on Wednesday 29 July 2020 by Gareth Prior

Sheffield is the latest location for our “Trams &” series as we take a look at one of the tram-trains on test as it is passed by a bus in the city centre.

On 15th September 2017 we find ourselves on Church Street in Sheffield City Centre with tram-train 399 206 on a test run/driver training trip as it approaches the Cathedral tramstop (one of the platforms of which can just be seen ahead of the tram). The actual tram-train service was still 12 months (and a bit!) away from opening and the vehicles were being tested on the remainder of the network with the view of them entering service to boost capacity.

Alongside the tram-train is a single-deck bus being operated by First on route 76 to Lowedges. Carrying the number 63019 this bus is a Wrightbus StreetLife. 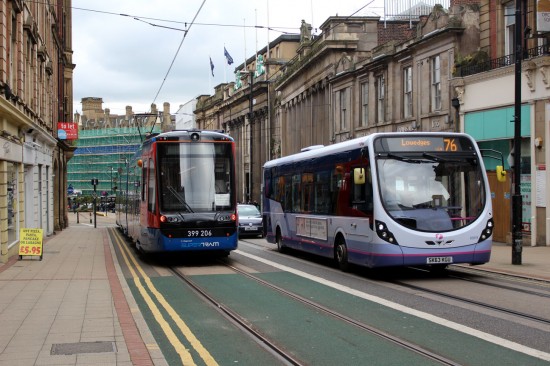