Posted on Wednesday 1 July 2020 by Gareth Prior

This latest look at a Tram and something else is again in the northeast of England at Beamish.

By a quirk of fate there are two ex-Sheffield trams numbered 264 which made it into preservation and in the below photo we are looking at the one based at Beamish. Built in 1907 by the United Electric Car Company in Preston it continued in service until 1956 (although by then had been renumbered 342) before it was withdrawn and initially moved to the Clapham Transport Museum. Originally arriving at Beamish in 1973 – via Consett – it ran as an open topper for 12 years before restoration to the condition it operates in today with an entry into service in this form during 1987. A further withdrawal came in 2002 but more work saw it back in service in 2016 – a shining example of the high-quality restorations we have come to expect from Beamish.

In this photo – taken from the top deck of an approaching tram at Pockerley – we see 264 waiting for departure on an anti-clockwise circuit just as the accessible bus – registration number J2007 – heads past with a service also heading around the museum in an anti-clockwise direction. The bus was built in 2007 and provides easy access to those in wheelchairs so they can still enjoy all that Beamish has to offer. It carries the bright colours of Venture. The image was taken on 1st September 2019. 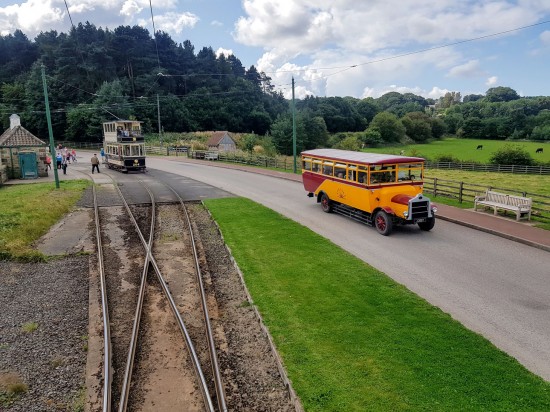