Today we feature Blackpool Ex-Towing Railcoach 679 – a tram currently being worked on hard by the Fylde Transport Trust to return to the tracks in its original condition.

On 6th July 1975 we see 679 about to leave the reserved track just north of the Metropole Hotel as it operates a southbound service to Starr Gate. With route card 13 in the window this would be a timetabled working and it seems to be a popular service with the tram looking pretty full.

By this time 679 was very much just a single Railcoach as its former trailer had been withdrawn three years earlier but it still retained the hoses for coupling as seen here. Unlike the first seven conversions the final three (678–680) were never permanently coupled to their respective trailers and remained solo motors all the way until they were withdrawn from service during the first decade of the 21st century. For 679 withdrawal came at the end of 2004 but did operate one final tour on a very foggy November day in 2008. The tram is now being restored to its original “pointed” end English Electric Railcoach condition with a return to the rails hoped for in the near future. 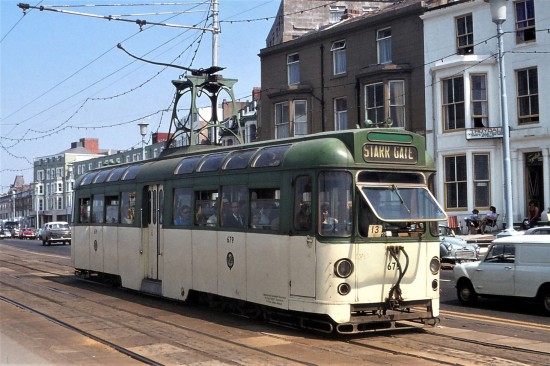