For our latest “Lockdown Walk” we are back on the West Midlands Metro for another look at one of the Urbos3s in service.

This latest photo is taken at West Bromwich Central which is another if the original Midland Metro stops first seeing services on 31st May 1999 when the service between Birmingham Snow Hill and Wolverhampton St George’s got underway. Originally the site of West Bromwich Station which opened in 1854 on the Snow Hill to Wolverhampton line, operated by the Great Western Railway, and would remain open as a railway station until 1972 when the line was closed. The station was demolished although the platforms did remain in place until construction work for the Metro got underway. 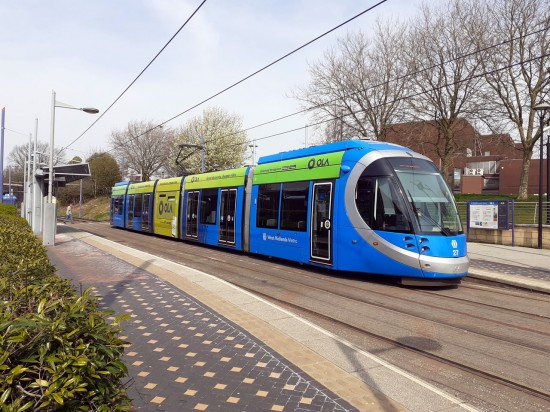 This photo we see 27 pausing at the stop on the way to Library in central Birmingham. This tram carried adverts for OLA, in the standard West Midlands Metro style featuring just a full height ad on the centre section. (Photograph by Andy Walters, 10th April 2020)

This entry was posted in Lockdown Walks, West Midlands Metro. Bookmark the permalink.