In this edition of “Trams &” we feature a tram and a bus at Crich, both of which are now part of the collection but we actually see them together before this happened as we head back to 2007.

The date of this photo is 29th September 2007 and it was taken during the Enthusiast’s Day of that year in the Crich depot yard showing two vehicles that had been operated by British Electric Traction. The tram is Gateshead 5 which was built in 1927 for operation in Gateshead and would remain in service until 1951 when the system closed. It then moved on to the Grimsby and Immingham Tramway where 5 – renumbered as 20 – ran for a further ten years until 1961. 5 was preserved and became part of the national collection at Crich where it has spent periods in service but is currently out of service.

As for the bus, this is Barnsley & District Electric Traction Company 5 – a vehicle which pre-dates the tram by 14 years having been introduced into service during 1913. No. 5 is a bus which shows the evolution between trams and buses and was introduced initially to provide a feeder to Barnsley’s tram service but in the end it proved to be so successful that BET took the decision eventually to replace their trams with buses. It remained in service until 1924 when it was withdrawn and sold on for further use before it was rescued in 1997 for a start to be made on restoring it by Mike Sutcliffe. This work was completed just the year before this photo was taken and it remained in the ownership of Mr Sutcliffe until 2018 when ownership was transferred to Crich with a similar photo opportunity – just on the opposite side of the depot fan! – provided during the 2019 Crich 60 event. 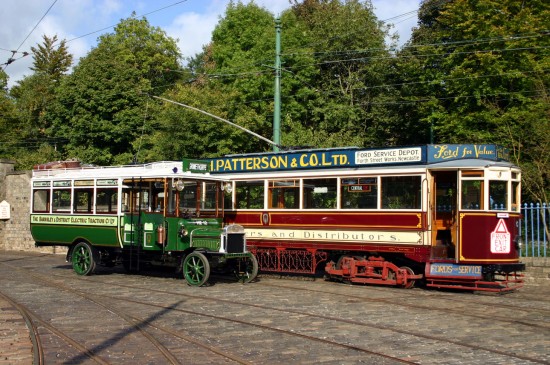