In Pictures: A second OLA advert on West Midlands Metro

Blue and green may not go together and now there are two examples of this on the West Midlands Metro with Urbos3 32 – the latest to go blue – now carrying ads for OLA, following on from 27 as seen earlier in the week.

32 made its debut in blue on Friday 6th September having last been seen in service in the old magenta, white and silver colours just three days earlier on Tuesday 3rd September – showing just how quick they can wrap a tram now. Although the tram was out on the mainline it wasn’t in passenger service but was instead dedicated to driver training duties on this day, a strange use for a tram in a new advert! Identical to the livery and adverts as seen on 27, 32 now becomes the twelfth tram to have operated in service in the full blue livery (plus another four which have eradicated the magenta of the old style but haven’t yet gone fully blue).

That means there are just five trams yet to have turned a wheel in the new house style – 22, 24, 25, 26 and 33. All of these are yet to have received batteries (as have the last few blue liveried trams as well) so presumably except for those currently receiving the battery equipment it won’t be too long before we see some more blue liveried trams in action. 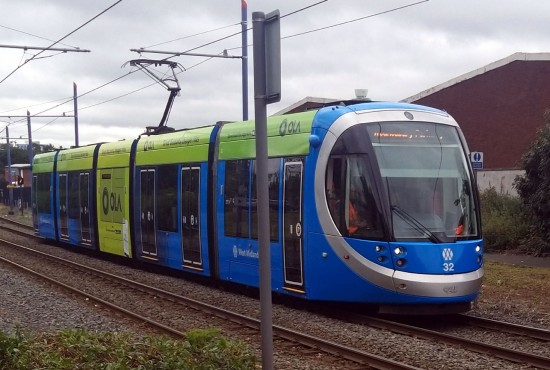 The new look 32 captured on camera on day one of this livery with a service heading for Wednesbury Parkway. (Photograph by Mark Cufflin, 6th September 2019)