As part of the latest Gold weekend of heritage tram operation in Blackpool, Rigby Road Depot held an open day on Sunday 25th August allowing the public access beyond the gates to see the trams both not needed for service on the day and those usually tucked up safely in the shed awaiting their chance to be restored for service. As well as the trams there were some other vintage vehicles on display along with trade stalls and model trams.

From a tram point of view the one of the highlights was the line-up of all remaining illuminated feature cars at the front of the shed. As well as the operational trio of the Western Train, Frigate and Trawler, both the Rocket and Hovertram were posed allowing this unique line-up of trams to be viewed once more.

Out on the depot fan and Bolton 66, Coronation 304, Brush 634 and Jubilee 761 were all displayed with the latter three open for inspection whilst it was also possible to try turning the trolley on 66 – with many visitors taking up the opportunity and proving its not as easy as its made to look by the volunteer crews!

In addition there were behind the scenes tours around the main part of the depot which included stories about the trams on view including some spooky goings on!

This was the first actual fully fledged open day held at Rigby Road since 2010 (previously only behind the scenes tours have been available at various times in the year) and once again it is pleasing to see Heritage Tram Tours trying something a little bit different to entice visitors to try out their offerings. With mainly fine weather and the last Bank Holiday before Christmas the weekend proved to be popular with visitors and long may that continue!

The next Gold weekend of heritage tram tours will now be the September Spectacular on 28th and 29th September which should see an intensive tram service including not only timetabled workings but also plenty of specials like the good old days of the Blackpool Tramway!

* More photos from the Depot Open Day will follow in a future update of British Trams Online. 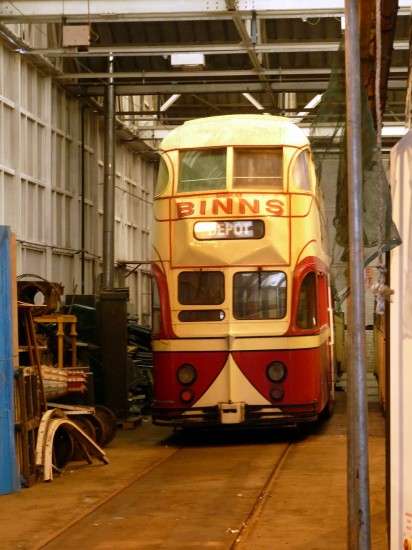 In the Electrical Compound we see Balloon 703 still in its guise as Sunderland 101, as applied for its spell at Beamish. (Photograph by Peter Dockerty) 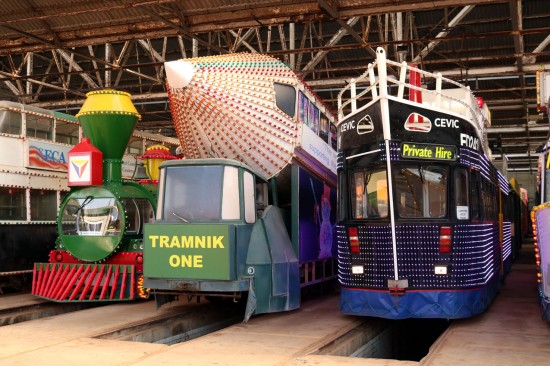 Part of the illuminated feature car line-up at the front of the depot with the Western Train, Rocket and Trawler all seen. The Hovertram is just visible on the far left and the Frigate on the right. 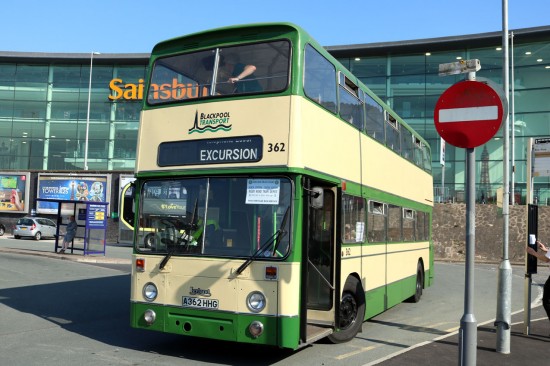 As well as the depot open day and standard heritage tram service there was a shuttle bus service linking the depot with both Blackpool North and Blackpool South railway stations. One bus used was Leyland Atlantean 362 seen here at Blackpool North. (Photographs x2 by Trevor Hall)