Posted on Thursday 18 April 2019 by Gareth Prior

With trams due to start running on the first part of the Birmingham Westside extension by the end of this year it is no surprise to see that good progress is now being made on track laying. Following on from the first tracks in Victoria Square the first are now in place on Pinfold Street.

The plan is that trams will be running from Grand Central to Centenary Square before this year is out (with the very first section of non-overhead tramway hence the need for batteries to be fitted) on the Birmingham Westside extension. The full line to Edgbaston will follow in 2021 – in time for the 2022 Commonwealth Games – but for now most concentration on construction remains on the first section. Pinfold Road – which is shortly after the current end of the line in Stephenson Street where Grand Central stop can be found – has had much preparation work over the last few months to ensure that the noise from the trams can be kept to a minimum and this is far enough advanced now to allow the first sections of track to be put in place. 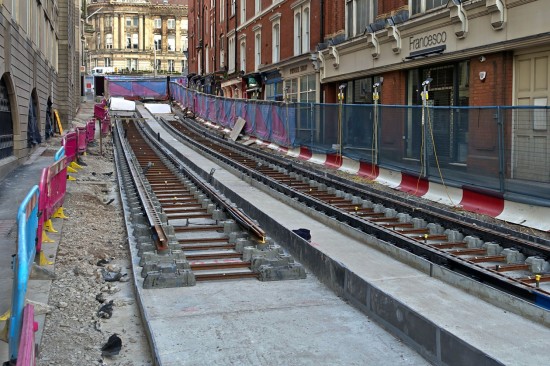