Posted on Thursday 18 April 2019 by Gareth Prior

Staying on the Isle of Man for our latest dip into the archives with an image showing one of the hard working Tunnel Cars in 1979.

This is no. 5 – one of six Tunnel Cars built for the Manx Electric Railway in 1894. At the time of this image 5 had recently received Isle of Man Railway livery (including the legend on the rocker panels) with the traditional red, teak and white colours included. As can be seen here anyone looking out for 5 after dark would be in luck as it had two headlights! The higher of the two lights had only been added a few years earlier and would remain in situ when the lower example was removed at a later date.

In this view the Derby Castle Shed foreman seems to be waiting for 5 although there doesn’t seem to be a driver on board. The Summerland complex is to the right. 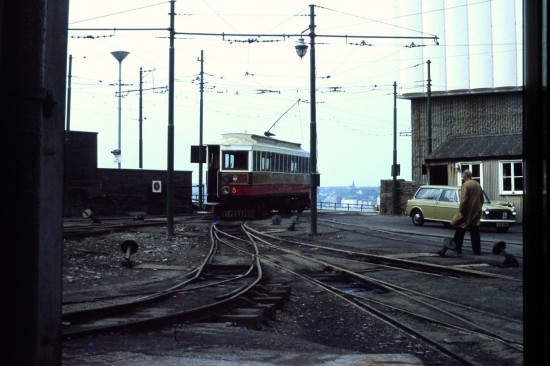