Posted on Tuesday 9 April 2019 by Gareth Prior

Another image from the front of Rigby Road Depot today as we continue our look at archive images from the Blackpool Tramway.

In this photo the main trams we can see are vehicles which are back at Rigby Road today but neither are currently operational waiting their chance to get into the workshops and be returned to service. In the centre we see Jubilee 761 which is carrying a bright yellow all over advert for Cresta; this was before the tram underwent a rebuild which saw it receive much larger destination blind apertures.

Probably the more fascinating tram here – no offence to 761! – is Illuminated Hovertram 735. At the time of this photo – 8th May 1997 – the Hovertram was still operational, as indeed were all four of the long-standing illuminated trams with withdrawals not coming for another couple of years. Like 761 the Hovertram has spent time away from Rigby Road but it was returned from the North East Land Sea and Air Museum on 22nd September 2016. 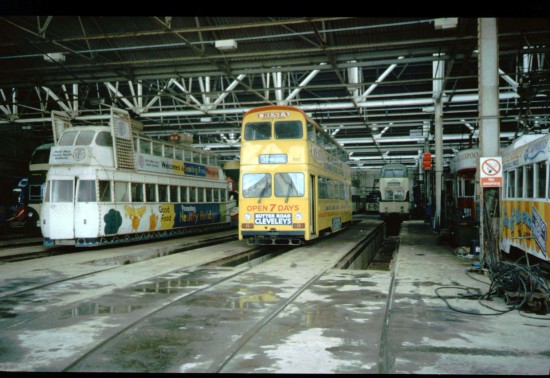