In Pictures: Concrete base in place on Pinfold Street

Posted on Friday 28 December 2018 by Gareth Prior

Whilst for many the pre-Christmas period is a time of winding down getting ready for the festivities that is far from the case on West Midlands Metro construction works with significant milestones reached on the both the Birmingham Westside and Wolverhampton City Centre lines. In Wolverhampton the tracks from the points at St George’s to the road bridge, just short of the railway station, are now fully tarmacked whilst at the other end of the line the concrete based is in place on Pinfold Street ahead of the installation of tracks. Andy Walters shows the situation in Birmingham. 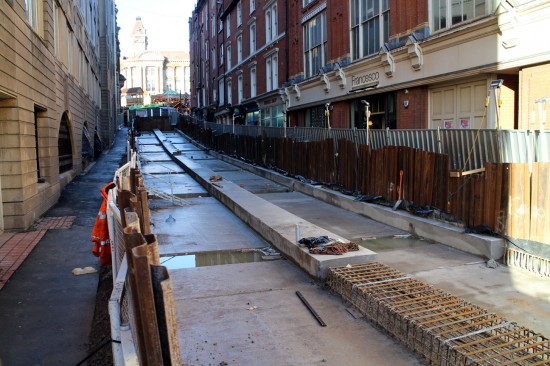 Looking up Pinfold Street towards Victoria Square on 19th December showing the concrete base now in place and waiting for the first tracks to be put in. (Photograph by Andy Walters)

2 Responses to In Pictures: Concrete base in place on Pinfold Street