Posted on Sunday 25 November 2018 by Gareth Prior

A Saturday morning in the lead up to Christmas is normally a time when public transport in major cities can except to be very busy as people head out to do their shopping. Alas on Saturday 24th November anyone wanting to catch the Tyne and Wear Metro was to be sadly disappointed as a major signalling and communications failure led to a complete service suspension with no trains running until shortly after 1100.

The fault was with the radio system on the network which prevented the control room from communicating with drivers; the safety issues this could have potentially caused were too large to allow any trains to enter service until it was resolved. Replacement buses were put on instead but the high profile timing of the disruption will have been no help for the reputation of the Tyne and Wear Metro with many going onto social media complaining about the reliability of the service. 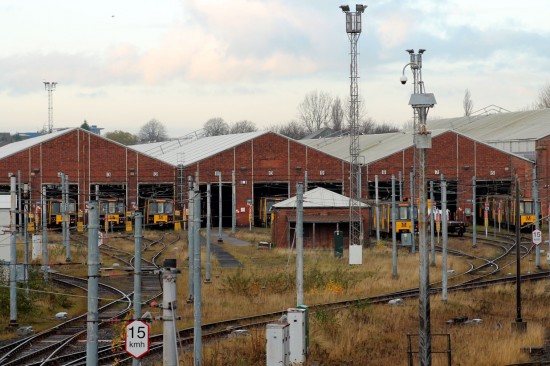 On a Saturday morning South Gosforth Depot would normally be pretty much empty of trains but on 24th November shortly after 1030 this was the scene with plenty of units waiting for the go-ahead to enter service. (Photograph by Trevor Hall)