Nominations open for Tram of the Year!

Posted on Sunday 25 November 2018 by Gareth Prior

Yes, it is once again that time of year – the time when we start the process of anointing the new winners of the British Trams Online Tram of the Year contest! Last year the winners were Douglas Bay Horse Tramway 36, Stagecoach Supertram 399 202, the Statfold Barn Railway and Statfold’s launch event of Burton & Ashby 14 but just what has done enough in the past 12 months to walk away this time around? Well, it’s over to you as for the next seven days nominations are open for you to help form the shortlists!

As for the past few years we are seeking nominations for four categories:

You can nominate as many times as you wish for as many categories you wish but please give reasons for your nomination to help us when we make the final decision on the shortlists. As always we are looking for trams, tramways and events which have done that something a little bit special over the past 12 months – and it is entirely up to you as to what you consider something special! It is probably fair to say that on the whole this year has been more steady than spectacular but we are sure there will still be trams, tramways and events that take your fancy for this year’s contest!

As a brief reminder the categories are as follows:

A category that has very much been dominated by Blackpool trams over the years but in 2017 for the first time the award went over to the Isle of Man with Douglas Bay Horse Tramway 36 the lucky winner having been the first tram returned to service after overhaul since the start of Isle of Man Transport’s operation. Other recent winners have included trams on loan, re-entering service after restoration and even special repaints.

But what has done that something special in 2018? You tell us!

2017 saw Stagecoach Supertram 399 202 becoming the first modern tram not from Manchester Metrolink to win this category as it had become the first of the class to run in public service.

And now its over to you to decide if there are any modern trams which deserve to be nominated in 2018!

The Statfold Barn Railway was the winner for this category in 2017 with its short demonstration tramway opening during the year to show off the repatriated Burton & Ashby 14. Over the years since this category was introduced the winners have been spread across the country with only Blackpool being crowned twice.

So, is there a tramway which you think has been above the rest in 2018? Don’t forget we aren’t looking for the tramway which has operated the best service (there are other awards for that) but just that tramway which you have enjoyed over the past year. Nominate now to let us know!

Are there any events you want to see on the shortlist from this year? If so please nominate now!

There are three ways you can submit nominations this year:

1. Leave a comment below. Juts remember if you aren’t already registered for the blog you will need to do so first.

You can also find out more about Tram of the Year on the dedicated page. 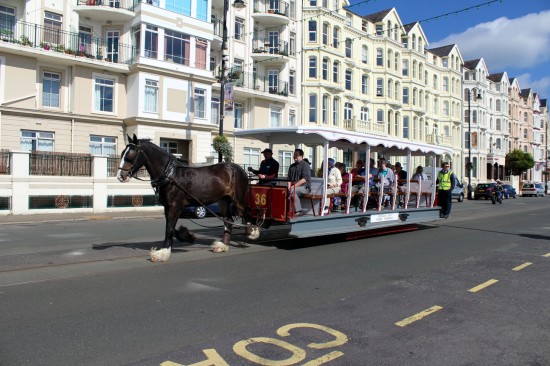 2017’s Tram (Traditional) of the Year was Douglas Bay Horse Tramway 36. The tram was captured on 5th September 2018 in this shot on the promenade in Douglas. (Photograph by Gareth Prior)

4 Responses to Nominations open for Tram of the Year!