We head back into the archives for today’s Picture in Time image with a view of the very first illuminated feature car built to carry passengers – the Blackpool Belle.

Built in 1959 the Blackpool Belle was based on the remains of Toastrack 163 and remained part of the feature car fleet for nigh on 20 years before withdrawal. The tram was based on a Mississippi Paddle Steamer and although to the casual observer it would seem to be a double decker it was in fact a single decker, and a single decker with a very low passenger capacity at that (only room for 32 passengers). The tram was used each illumination season until 1978 when it was withdrawn from service requiring an overhaul which was deemed not to be worthwhile due in part to its small capacity and also the condition of the underframe. Two final enthusiast tours were undertaken in 1979 and the Belle was then acquired for preservation in the United States of America. After a period of operation across the Atlantic – during which time it lost the fittings from the top of the tram – it was sold to test power systems and as far as is known has since been completely scrapped. The only of the passenger carrying feature cars to have suffered this fate.

This photo shows the Belle in the late 1970s featuring adverts for Haig Whisky. The Warship can be seen behind. 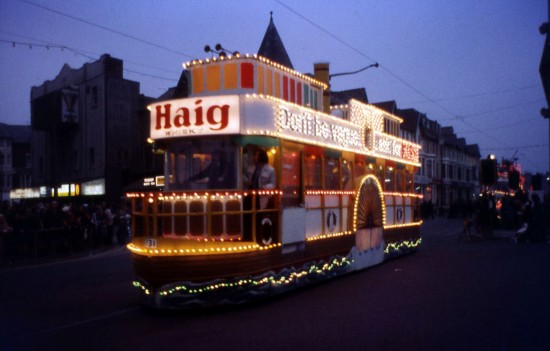