Posted on Tuesday 11 September 2018 by Gareth Prior

Picture in Time continues today and in this instalment we are in Blackpool for a view of a couple of Balloons at Bispham.

The two Balloon Cars seen here are 719 (on the left) and 709 – two trams which remain in Blackpool to this day but have both been modified to become part of the B fleet with widened entrances. 719 has just terminated with a service from the south and the rear destination blind seems to have already been changed for a return trip to Pleasure Beach. As for 709 it is on the southbound line and will also be heading to Pleasure Beach.

719 is in the 1980s style of fleet livery whilst 709 has received the 1990s version. Both have T side adverts with the right hand tram advertising the Russ Abbot show at North Pier. Of course today not only are both members of the B fleet but for 709 it was also subject to a rebuild and now features flat fronts. 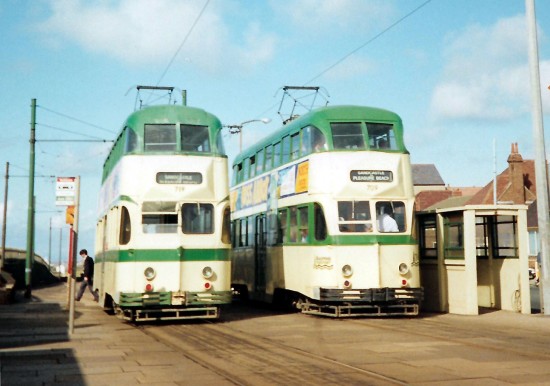