In Pictures: Overhead issue on Metrolink

Posted on Wednesday 18 July 2018 by Gareth Prior

It’s spreading! Manchester Metrolink has now suffered from an overhead problem with issues with the overhead at St Peter’s Square on the 2CC lines. The problem was first reported around 0700 with repairs completed to allow a normal service to resume around three hours later.

Showing the big advantage of having a second line through the city centre though service disruption was kept to a minimum as all trams between East Didsbury and Shaw & Crompton/Rochdale Town Centre were just diverted by 1CC. Granted this did cause a bit more congestion through St Peter’s Square to Victoria via Market Street and Shudehill but at least trams continued to run with only the stop at Exchange Square not served. 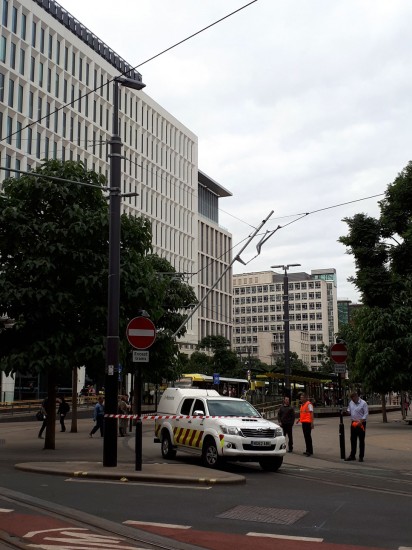 The severity of the problem is seen here with the bar which supports the overhead wire hanging down. Metrolink staff are on hand to survey the scene. (Photograph by Mark Sheppard)