In Pictures: Bluebird meets with its bogies

Posted on Wednesday 18 July 2018 by Gareth Prior

London County Council 1 – or Bluebird if you prefer – has been reunited with its bogies temporarily as the major restoration of the tram continues at Crich. The temporary fitting of the bogies saw the tram moved out of its long term place in the Workshop and into the depot yard to test for clearances.

The restoration of 1 has been ongoing for over four years now – it was first moved into the Workshop on Saturday 14th June 2014 – and the project has very much now entered the putting bits back on stage rather than taking bits off for repair! The most striking thing of the tram to the casual observer will be the stunning first coats of blue paint including the distinctive “V” on the end dash.

The overhauled bogies met up with the tram body again on Tuesday 17th July with Berlin 223 006-4 being used as the shunter to move the tram around the depot yard. The purpose of the trial fitting is to check for clearances and also to look for any potential issues with the new pipework.

There is still quite some work to be completed before Bluebird is once again carrying passengers – an October 2019 launch date has been announced – but we are sure you agree that the work done so far really does wet the appetite for the finished product! 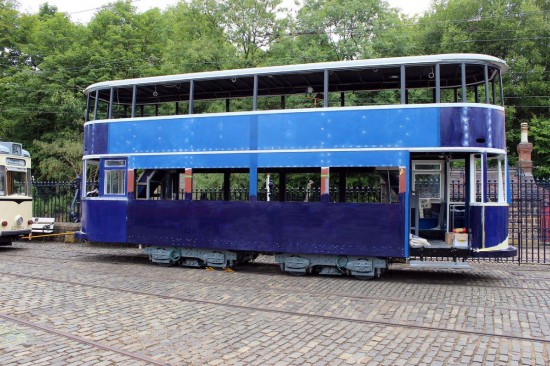 A side on view of 1 outside the Workshop including the last remnants of the red paintwork. 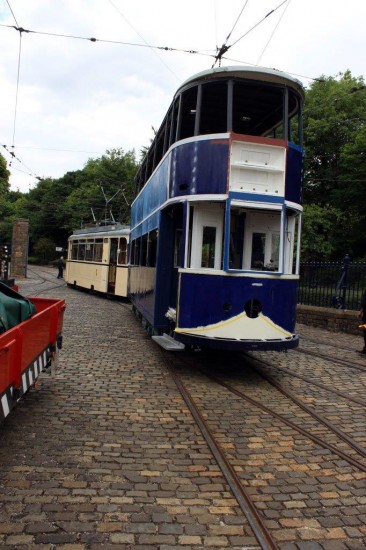 Bluebird along with 223 006-4 outside the Workshop with the bogies trial fitted for the first time. The stunning start of the paint job can be seen to good effect here. 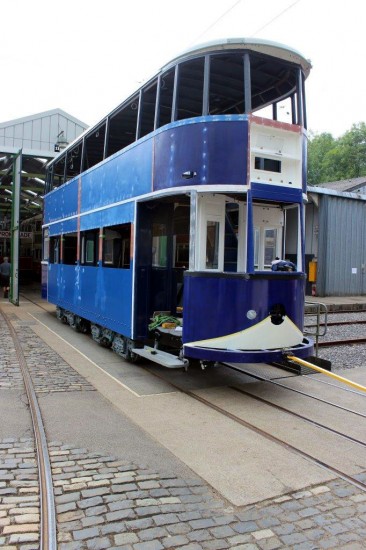 The tram was moved around the depot yard to check those all important clearances making its way across to the Traverser, as seen here. (All Photographs by Andy Bailey)

1 Response to In Pictures: Bluebird meets with its bogies