Posted on Tuesday 8 May 2018 by Gareth Prior

Having two trams in identical vinyl wrap adverts seems to be in vogue on UK tramways at the moment with Manchester Metrolink joining Stagecoach Supertram in the blub. This time the advertiser is Just Eat – who also advertise on Nottingham Express Transit 210 – whose distinctive colour scheme now adorns 3039 and 3085.

Both trams debuted in early May with their new liveries and both of the adverts seem to be identical unless there are some minor differences that aren’t easily identified at first glance! With NET 210 also advertising Just Eat this means that two separate UK tramways are advertising the same company at the same time in a full all over advert – believed to be the first time this has happened unless someone can correct us? It isn’t the first time that the same company has an advert on different tramways but these have not been in place concurrently.

Not previously reported on these pages is the removal of the vinyls on 3004 (LBC) and 3018 (Call of Duty) which are now both back in standard fleet livery whilst 3092 is now also running with its spots arranged as per the standard instead of in the shape of 92 as part of its former 25th anniversary livery. 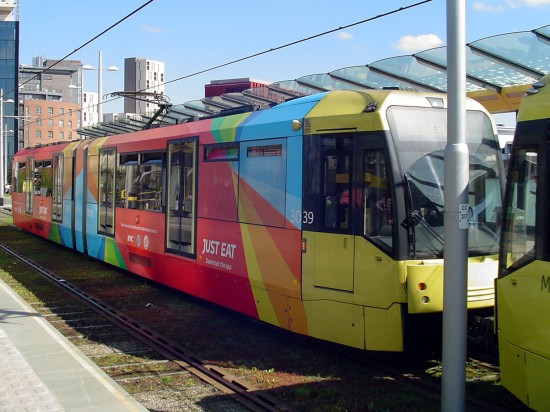 3039 is seen as the rear tram of a double unit on 5th May running to Altrincham showing off its new vinyl wrap advert for Just Eat. 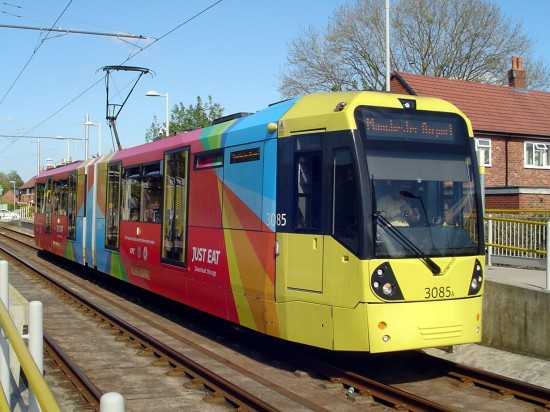 Spot the difference! 3085 on the same day at Northern Moor working on the Manchester Airport route. (Both Photographs by Dave Elison)