Posted on Monday 23 January 2017 by Gareth Prior

Opening of Manchester Metrolink’s Second City Crossing (2CC) continues to move closer with another round of successful testing taking place over the weekend. Nine trams were out on the line on Sunday 22nd January with Cllrs Andrew Fender and Pat Karney joining the engineers to witness the rigorous testing and commissioning process.

Although no date has yet been announced – this will follow in the “coming weeks” – the increase in testing is a good sign that everything is on track for services to travel on 2CC in the early part of this year. 2CC will leave the current line at St Peter’s Square – where an enlarged stop has been built – travelling along Princess Street and Cross Street before calling at the Exchange Square stop and then rejoining the original line just before Victoria. The short section from Victoria to Exchange Square opened in December 2015.

2CC is the final piece in the jigsaw of Manchester Metrolink’s £1.5bn “big bang” expansion programme and will allow for more trams to run through the city centre whilst also allowing for more operational flexibility.

Cllr Andrew Fender, Chair of the TfGM Committee, said: “We’re on the home stretch now as engineers carry out the final phase of testing to check all the infrastructure and test out the tram management system on this important new route through the city. While the Second City Crossing is a relatively short stretch of line, it is a crucial piece in the Metrolink jigsaw – allowing us to run more trams on a more flexible and reliable tram network. That’s great news not just for the city centre, but for customers right across Greater Manchester.” 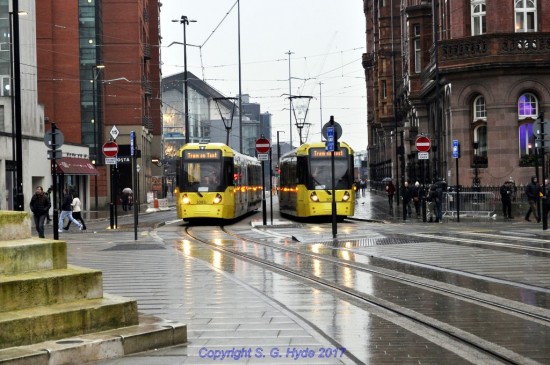 The latest day of testing was on Sunday 22nd January with nine trams in use. One of the aims of these tests was to check the interfaces with the traffic signals under various scenarios. Here the effect of presenting simultaneous signal demands from four trams was to be tested. 3083 and a double unit headed by 3005 wait alongside the Midland Hotel to cross Oxford Street whilst 2 more trams were waiting at the southbound platforms. (Photograph by Steve Hyde)

* More photos will of the testing will be included in a future update of British Trams Online.