Posted on Tuesday 24 January 2017 by Gareth Prior

Today Picture in Time is back on the Isle of Man as we take a trip to Ramsey and find one of the “oldest trams in the world to still run on their original line” operating over 50 years ago when it might not actually have been able to use that title!

This is no. 2 which was one of three trams built for the opening of the Manx Electric Railway in 1893. Of the original trio no. 3 was destroyed in 1930 during the Laxey Car Shed fire leaving 1 and 2 to carry the flag ever since which they have done proudly, even more so in recent years with their historical value seemingly recognised even more.

This photo was taken in August 1963 and shows no. 2 presumably during a shunting move (as there are no passengers on board the tram) at Ramsey. The tram was carrying a fairly plain but traditional livery of Red, Teak and White at this time as seen in this view. 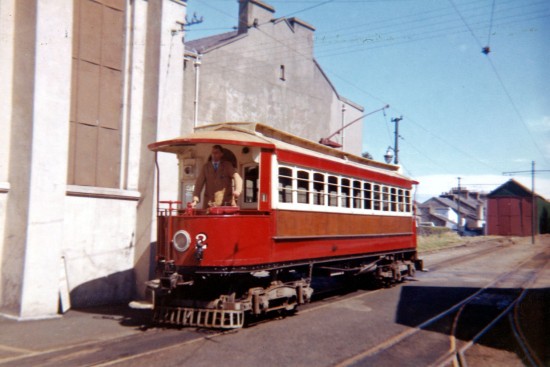