Another rise in passenger numbers for Edinburgh

Posted on Monday 23 January 2017 by Gareth Prior

Lea Harison, General Manager of Edinburgh Trams, said: “We are continuing to perform way ahead of our business model targets and we’re absolutely delighted to be able to demonstrate that both the people of Edinburgh and visitors to the city are using our services in such significant numbers. The tram has now firmly established itself as a major part of the city’s public transport infrastructure and, as we continue to make service improvements we hope to attract even more customers in the future.”

Already in 2017 service frequencies have been increased with trams now running up to every seven minutes, seven days a week in order to meet customer demand.

George Lowder, Chief Executive of Transport for Edinburgh, said: “Edinburgh Trams has demonstrated another strong performance in 2016, proving that it is a key part of Edinburgh’s integrated transport network. These results are very encouraging. The growth in patronage shows an increase in people using public transport who previously were not. 2016 was a year of service enhancements introducing faster, more frequent, services and the hard work undertaken by Lea and the Team at Edinburgh Trams has paid off, with this positive result.”

It is hoped that 2017 may seem good news on the extension front with plans being progressed for the line to extend to Newhaven via Leith Walk. No decision on this will be made until after the May elections but it has recently been reported in Edinburgh that Lothian Buses have agreed to pay a £20m “extraordinary dividend” to help fund the line. However there are fears that this may lead to fare increases and service cuts on the buses with the Unite Union leading calls that any dividend should not be at the expense of buses. 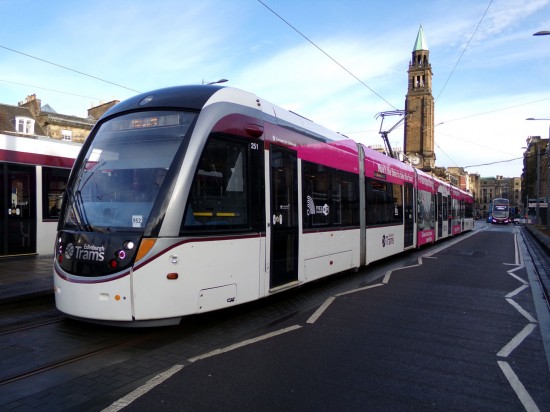 251 is in a special livery publicising the increased services now running thanks to passenger demand. On 16th January it is seen at West End Princes Street. (Photograph by Alasdair Macfarlane)