Posted on Thursday 24 November 2016 by Gareth Prior

We head back over 40 years to Blackpool for our latest edition of Picture in Time and feature one of the iconic Balloon Cars – 713.

This is Balloon Car 713, the first of the as delivered fully enclosed Balloon Cars for the Blackpool Tramway, arriving in the resort in the last month of 1934 with a swift entry into service on 15th December of the same year. By the time the tram was captured on camera at Fleetwood Ferry – with the North Euston Hotel in the background – it had seen its double indicators replaced by a single indicator but other changes which were to follow in the future were still a long way away. In this view the tram is waiting for departure with a service for Manchester Square in June 1972 but it doesn’t appear that passengers are too keen for a trip on board the tram. 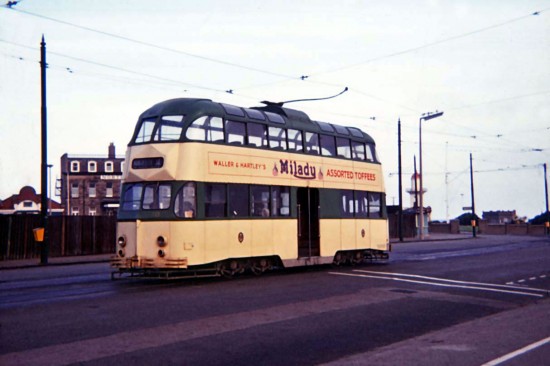